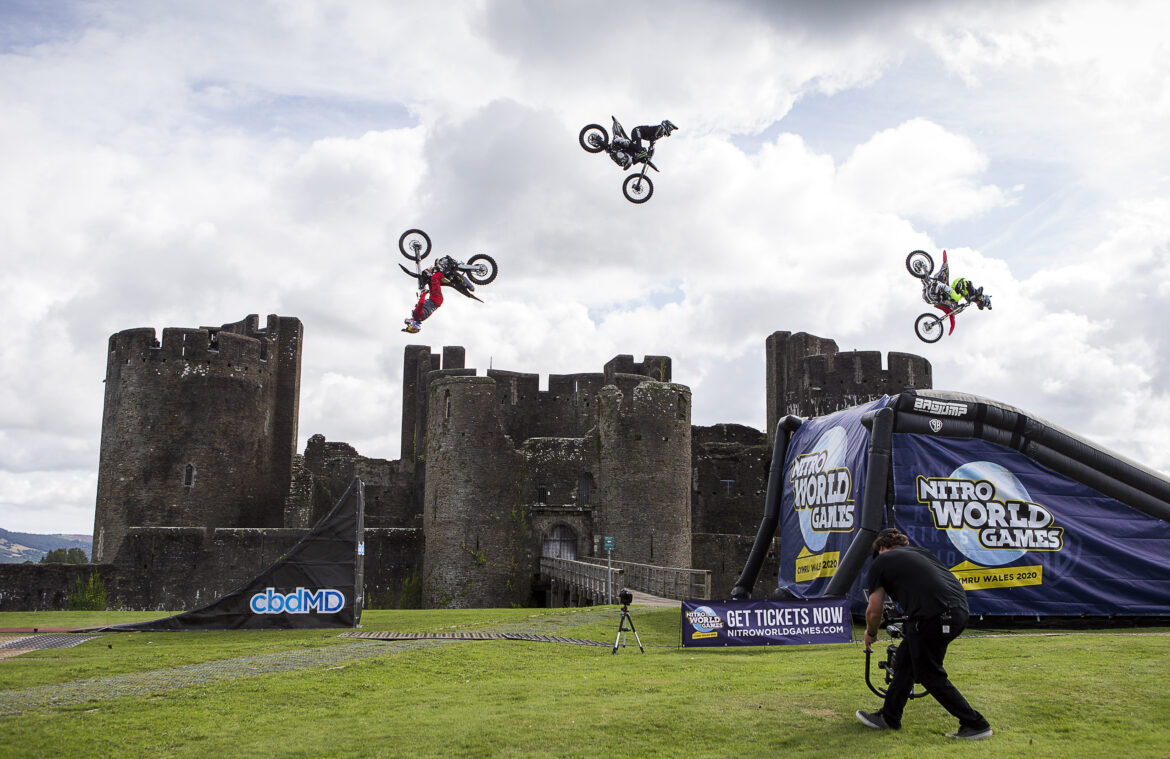 The historic Welsh landmark has seen more than its share of notable moments, but is not likely to have experienced anything as gravity-defying.

This accomplishment previews the Nitro World Games – Wales 2020 action sports competition, now expanding outside of the U.S. for the first time.

Over Bank Holiday Weekend on the 23rd and 24th of May, more than 100 of the best athletes in FMX, BMX, skate and freestyle scooter will face off at Cardiff’s Principality Stadium to battle for a coveted podium spot.

During the Caerphilly Castle stunt, however, the spirit of camaraderie prevailed. “To land that with two of my good friends is absolutely amazing,” Jackson Strong explained afterwards. “Normally freestyle motocross isn’t a team sport. You are usually going out there competing against each other. But, to have the opportunity to do something like this with two of my friends is something I will never forget.”

Josh Sheehan said, “This was really cool; it was only a few years ago that there were only one or two guys doing double backflips. But today we had three people doing them. It shows that the sport is moving forward.”

Sheehan added, “I’m really excited for Wales 2020. Because not only is this an awesome location; there are a lot of people here that are into action sports and it’s a beautiful outside. We also have a state-of-the-art stadium where we can have a perfect setup, focus solely on our tricks and put on an awesome show.”

Luc Ackermann said, “It feels amazing. I’m very happy. It definitely feels like another step [in FMX] to land the triple double flip.”

With a standard double backflip still among the most difficult and dangerous tricks in FMX, attempting to land three of them, all in one run, raised the stakes tremendously. To be successful and ride away safely there was simply no margin for error.

First, Sheehan, Strong and Ackermann had to launch their 220-pound motorbikes into the air in quick succession, one immediately after the other. Then, they needed to complete two full rotations in tight formation only seconds before touching down on the landing ramp.

While each of these top-tier athletes have experience pushing the envelope – Sheehan with the first triple backflip on a motorbike, Strong with the first frontflip to dirt and Ackermann as the youngest rider to land both a single and a double backflip – achieving this puts them at the very forefront of the sport.

Afterwards, Josh Sheehan described the attempt: “In practice we all felt pretty good about each of our doubles, but it still didn’t prepare us for the train. First the noise – I could hear the bikes screaming through the air – then trying to be so close to the person in front of and behind you. We had to really focus on what we were doing. But to land it was exhilarating.”