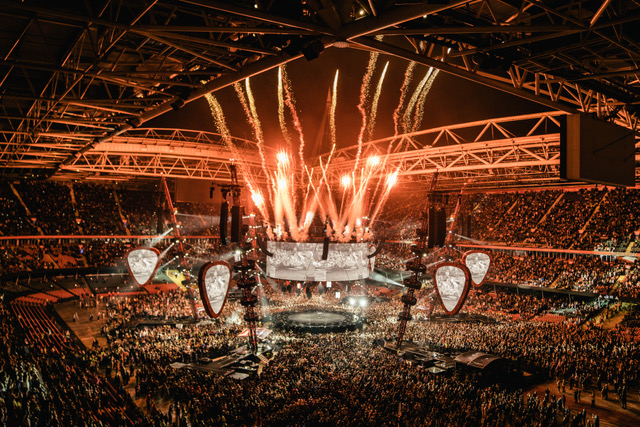 Ed Sheeran is set to make history again tonight, playing to the biggest capacity crowd concert in Wales. The sell-out Friday crowd is set to expect over 75,000 fans, marking the largest concert to have ever taken place in Wales.

The 360 degree immersive stage experience in the centre of the floor means that all three seated tiers can be taken up by fans, as well as standing tickets on the floor.

Ed Sheeran wowed fans last night with an epic light show and set list of classic songs from The A Team and Galway Girl to hits from his latest album ‘Equals’, and as is tradition, came out for the encore in a Welsh Rugby jersey to the delight of the crowd.

“I love playing in Wales, I first came here to play student house parties back in 2009 to less than 20 people at a time, so to be now playing the biggest crowd in Wales ever is pretty nuts. I hope everyone loves the show, it’s been a long process making sure it’s a real spectacle and I’m really proud of my touring crew and team for the show we are bringing. Enjoy it !” says Ed Sheeran

This is the first time Ed has returned to Cardiff to perform following the record breaking four night run in 2018, playing to a record crowd of 240,000 over the four nights as part of his 2018 UK stadium tour.

Limited tickets for Saturday 28th May, the final night of Ed Sheeran’s Mathematics Tour in Cardiff are still available. Tickets can be purchased via edsheeran.com.