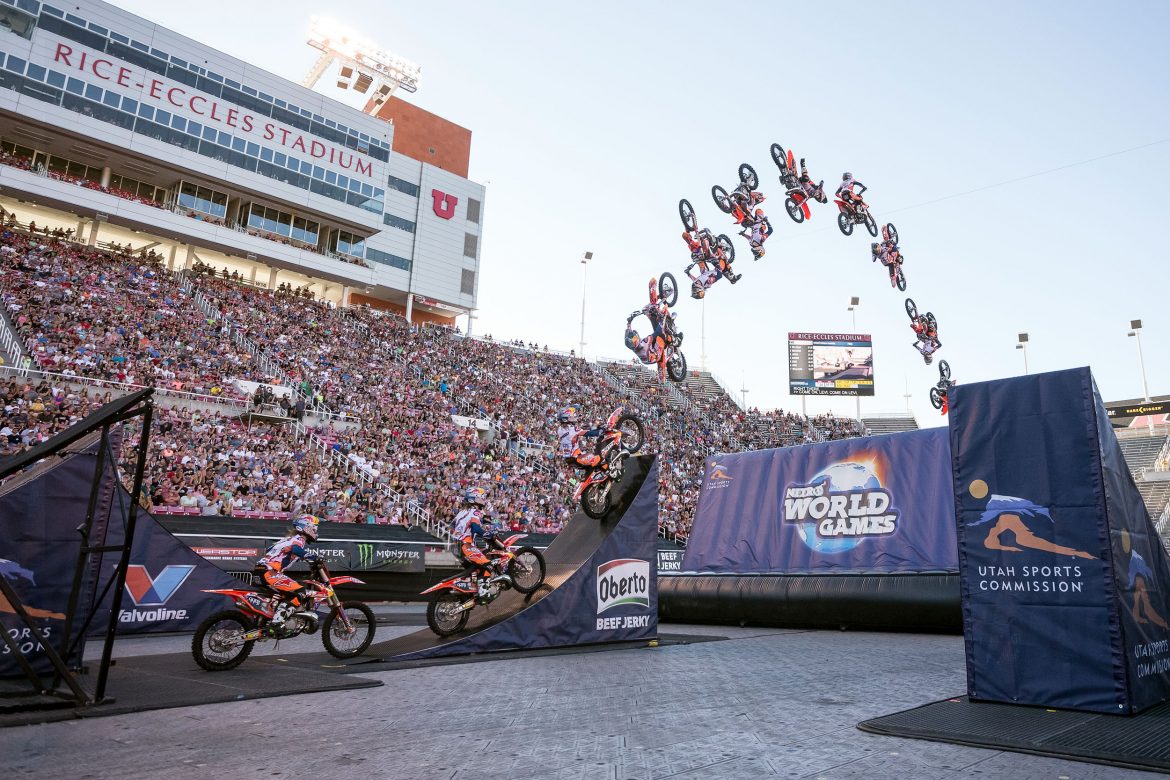 The Nitro World Games are coming to Cardiff in June 2020, the first time the freestyle motocross (FMX), BMX, skate and freestyle scooter event has been hosted outside the USA

More than 100 of the best athletes in sport’s most extreme disciplines will gather in Cardiff next spring, when the world’s pre-eminent action sports competition takes place  outside of U.S. Global sport for the first time.

Next year, elite competitors in freestyle motocross (FMX), BMX, skate and freestyle scooter will face off not only for a coveted trophy, but more importantly for ultimate bragging rights as a world champion. Tickets are available starting this Friday, 14 June at 10AM BST at nitroworldgames.com.

Martyn Phillips, chief executive of the Welsh Rugby Union, which owns and operates Principality Stadium, said, “From hosting World Championship boxing, Olympic football, Rugby World Cup and the UEFA Champions League finals, to sell-out concerts from some of the biggest acts on the international music scene, Principality Stadium has cemented its global reputation as a ‘must play’, multi-event venue.

“Events like Monster Jam and FIM British Speedway, where tonnes of earth are shipped into the stadium to create bespoke tracks and courses, also highlight our versatility and ability to attract a range of audiences to enjoy a wide variety of shows in addition to our staple diet of capacity international rugby union events.

“Nitro World Games is the latest, but will also be one of the greatest, examples of both our global appeal and our adaptability as a multi-event facility.

“It is with a great deal of excitement that we look forward to transforming the world’s most chameleon-like, iconic, stadium, with its retractable roof and changeable playing surface, into the perfect host venue for this amazing celebration of action sports.”

Travis Pastrana, action sports icon and co-creator of the event, said, “With Nitro World Games, our mission was to allow athletes to push their sports to the next level.

“We wanted to give athletes bigger ramps along with innovative landing technology which allows them to push the envelope and attempt tricks previously thought impossible.

“To see Nitro World Games thrive after three years in the U.S. and now crossing borders for the first time and coming to Cardiff, Wales, I couldn’t be more thrilled.”

Nitro World Games Wales 2020 will take over Principality Stadium with five electrifying action sports disciplines, all of which push the limits of gravity.

Freestyle Motocross and BMX Best Trick each take big air action to the next level thanks to the world’s biggest and tallest ramps, and both have been fan favorites since the event’s inception.

Skate Vert, a recent addition to Nitro World Games, will see top athletes take on the halfpipe, and rounding out the event is Scooter Best Trick, featuring one of action sports’ fastest growing disciplines and the biggest ramp used in competition.

And with weekend ticket packages starting at 45 Pounds, Nitro World Games offers fans the opportunity to see the best in action sports, all at a great price (final ticket prices also include additional charges and fees). 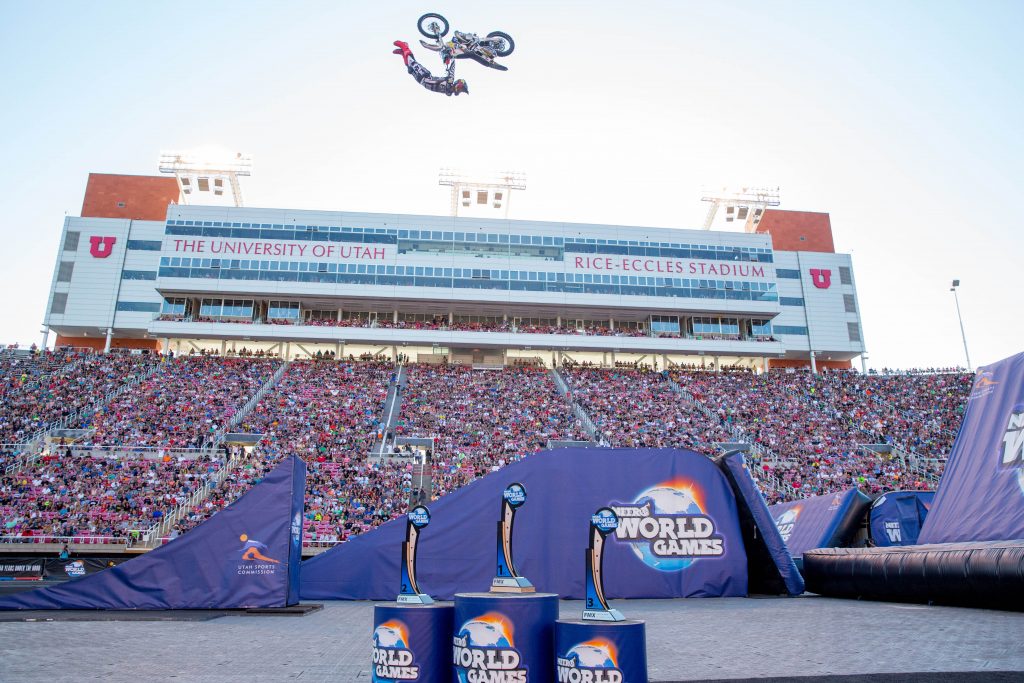 Freestyle Motocross and BMX Best Trick each take big air action to the next level thanks to the world’s biggest and tallest ramps, and both have been fan favorites since the event’s inception.

“With its abundance of world class downhill trails and surf breaks and a nationwide network of passionate adventure and action sports fans, Wales is the perfect home for Nitro World Games”, said Andy Edwards, CEO of Nitro Circus.

“Cardiff boasts an impressive history of marquee live sport events including the UEFA Champions League Final and the Rugby World Cup at Principality Stadium. We’re honoured to now become part of this rich history and we can’t wait for Nitro World Games to make its international debut here next year.”

“This will be the first time the games have been hosted outside the U.S. and is another historic milestone for Wales and a reflection of our growing reputation as an outstanding events destination.

“Many of the world’s leading action sports athletes will compete in the unique atmosphere of the Principality Stadium, and I’m sure their gravity-defying tricks will provide the tens of thousands of spectators with a breath-taking experience.”

Andy Copping, Live Nation’s Executive President of UK Touring said, “We look forward to welcoming this prestigious global action sports event to the U.K. for the first time ever and cannot wait for fans and spectators to descend to Cardiff which is a fantastic host city.

“Nitro World Games will showcase some of the finest athletes being pushed to their limits, we hope this inspires a generation. Live Nation are thrilled to be contributing to the international success story of the Nitro World Games”

Cabinet Member for Culture and Leisure, Councillor Peter Bradbury said: “Cardiff has successfully hosted sports events of all shapes and sizes, from football, to rugby, cricket, sailing, cycling and more – but the all-action experience of the Nitro World Games looks sure to bring something that little bit different to the city.

“There’s always a warm welcome for visitors here in the Welsh capital and we’re looking forward to showing action-sports fans exactly why events and Cardiff work so well together.”

While the world-class competition will have attendees on the edge of their seats, there will be plenty of action happening outside the stadium as well.

After cheering on the athletes and their spectacular successes, fans can share that celebratory spirit by enjoying the wide variety of live entertainment and great food Cardiff has to offer.

Over the course of the holiday weekend, Nitro World Games Wales will become a vibrant festival of sport and culture. Further announcements regarding the fan experience are coming soon.

With a mix of exciting, adrenaline-charged events, huge big air formats and innovative ramp design, it has given top athletes from across the globe the opportunity to reach ever greater heights and achieve breathtaking world’s firsts. Groundbreaking accomplishments – such as Gregg Duffy’s motorcycle double frontlfip and Harry Bink’s frontflip rock solid — have redefined what’s possible while captivating fans of all ages.

BMX icon TJ Lavin has proclaimed, “Nitro World Games is definitely stepping up their game. In my opinion, this is probably the new series to be the champion of.”

Now, just three years from its beginnings as a one-day contest, Nitro World Games has grown into a truly global event as it leaves American shores for the first time.

Created by Nitro Circus and action sports icon Travis Pastrana, Nitro World Games pushes the limits of action sports competition. Featuring new big air formats, breakthrough ramp technology and innovative judging criteria, Nitro World Games shifted the landscape for both athletes and the industry alike in its 2016 debut and Nitro Circus’ global livestream reached a hungry audience worldwide. Then the 2018 addition of Nitro Rallycross and Moto Quarterpipe broke new ground once again, as Nitro World Games moved into four-wheel motorsport for the first time and introduced the largest moto quarterpipe ever seen in competition.
Now established as a premium brand in the United States, Nitro World Games is expanding internationally with the addition of Nitro World Games Wales 2020. Coming to world-renowned Principality Stadium in May 2020, look for more records to fall as the boundaries of speed and gravity are pushed further still.