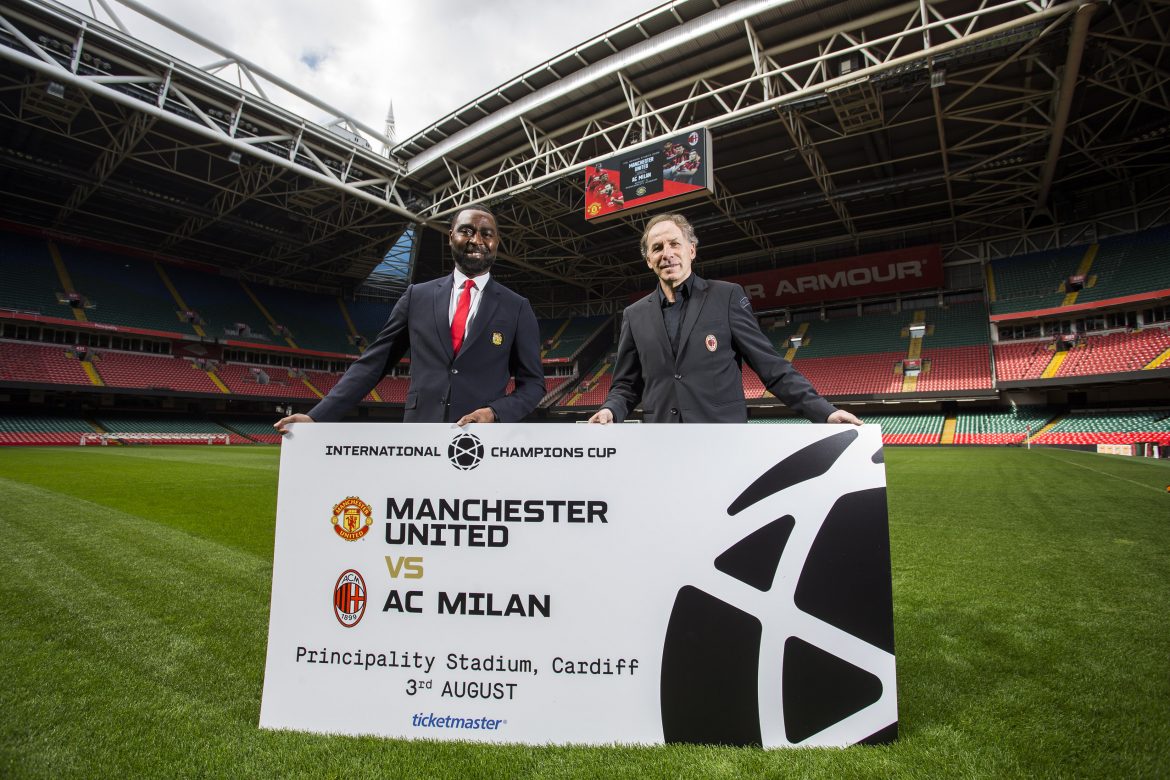 Tickets on sale for Man Utd versus AC Milan

Tickets are now on general sale for the Principality Stadium clash between European giants Manchester United and AC Milan.

The pair of football heavyweights meet in the Welsh capital on Saturday 3rd August for their third and final International Champions Cup fixture before they kickoff their 2019/20 campaigns. Football fans from Wales and beyond now have the chance to watch some of European football’s brightest talents marquee summer signings in action from only £10 for children and £25 for adults.

Manchester United and AC Milan legends Andy Cole and Franco Baresi – who have four European Cup triumphs between them – unveiled the glamour friendly at the Principality Stadium this week. It will be both teams’ last chance to sharpen their skills before they aim to conquer the Premier League and Serie A, and both Cole and Baresi expect the Cardiff clash to be an unmissable event.

“I was fortunate enough to get a winner here at this great stadium for Blackburn back in 2002,” said Cole. “It’s a great opportunity for the people of Wales to watch Manchester United and AC Milan during the pre season period.

“It’s a special stadium, especially when it’s a full house here, I understand why the Welsh boys love playing here. The fans can expect a good football match between two clubs with great history and great prestige. There is no such thing as a friendly so I think it will be a great match.”

The game will be Manchester United’s only pre season fixture in Europe before they begin their Premier League season. United and AC Milan join 10 more of the best clubs in the world to take part in the tournament’s seventh instalment, which includes rare matchups, historic rivalries and past winners of the UEFA Champions League, all major European leagues and Liga MX.

The Principality Stadium has played host to FA Cup, League Cup, Football League play-off and Champions League finals. And Baresi is relishing the chance to experience the famous Cardiff atmosphere.

“I’m very happy that AC Milan will play in Cardiff for the first time, there is a real passion for football here, said World Cup winner Baresi. “We’re looking forward to playing a team of the calibre of Manchester United in what promises to be a great match up.

“Unfortunately in Italy, stadiums are not as nice as this one. There aren’t many that compare to the Principality Stadium and so it will be a great pleasure to play in this stadium, especially in-front of a capacity crowd of almost 74,000.”

The two giants of European football have met on 10 occasions since 1958 with both sides claiming five victories. The most recent of these fixtures was in 2010 when Wayne Rooney led United to a comfortable 4-0 win over an AC Milan side that included former Red Devil David Beckham. Manchester United’s last appearance at the home of Welsh rugby was a 4-0 win against Wigan in the 2006 League Cup Final.

Manchester United vs AC Milan at Principality Stadium in Cardiff on August 3rd.