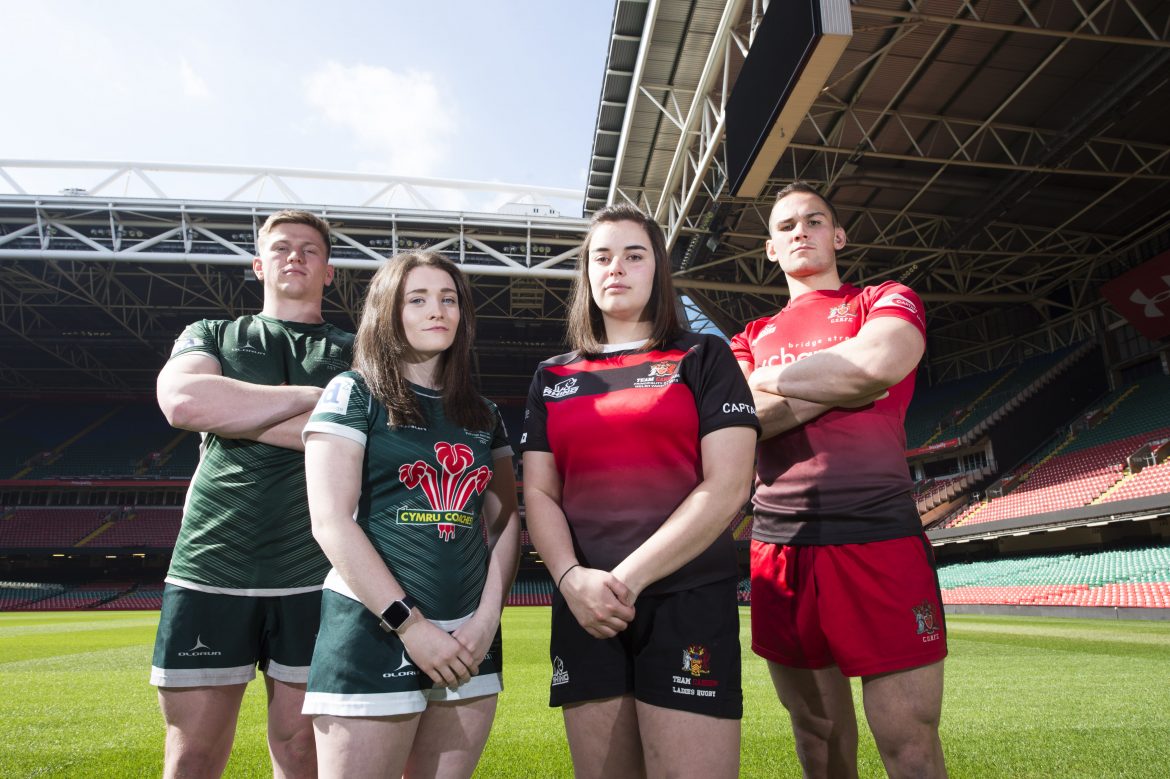 Jack Tharm and Jessica McCreery of Swansea University with Molly Danks and Tom Wilson of Cardiff University during a Welsh Varsity photocall.

Countdown is on for Welsh Varsity

The countdown to the 2019 Welsh Varsity has begun with the big day at Principality Stadium on Wednesday, April 10 inching ever closer.

The rivalry between Cardiff University and Swansea University is entrenched in Welsh rugby history with the inaugural match between the two institutions first taking place in 1997.

Cardiff University won last season’s showpiece event at the Liberty Stadium with a thrilling 23-15 victory. With the 2019 match now a matter of weeks away, Cardiff captain Tom Wilson is confident his side have the ability to retain their crown.

“We’ve had a good season on the back of getting promoted to BUCS Super Rugby the season before,” said the mechanical engineering student.

“We struggled in the first part of the season adapting to the quicker pace in a more physical league, but as the season has gone by we’ve adapted and picked up some big scalps at home. We’ve managed to finish above the likes of Loughborough and Nottingham Trent.

“It’s been a really successful season. We’ve really tested ourselves this year and come across a better calibre of opponents which has pushed us on as a team. I’ve played in two Welsh Varsity games at the Liberty Stadium. I’ve won one and lost one.

“I’ve never played at the Principality Stadium before and I don’t think many people get the opportunity to. It’s a massive opportunity for everyone.

“We will be going into the game at 100 per cent. It would be great to end with a win.”
Swansea are one division below Cardiff, but have enjoyed a very successful campaign as they target promotion via the end of season play-offs.

Their captain Jack Tharme is confident the momentum his side has created this season can bridge the gap with their Welsh rivals.

“Varsity is a massive event on the calendar and we’re really excited,” said the aerospace engineering student. “I played at the Liberty Stadium last year, but unfortunately we didn’t win that one. “Hopefully we can get revenge this year. The magic of Varsity is it’s always going to be a close game whatever has happened before. We will embrace the atmosphere and we won’t let nerves get the better of us. We will use that energy on the pitch, but we need to keep a level head with it.

“We play a fast and exciting brand of rugby.We will throw the ball around a bit and hopefully some magic can happen.”

The men’s Welsh Varsity clash will be preceded by a meeting between the two women’s sides from both Cardiff and Swansea.

Cardiff women’s captain Molly Danks said: “It’s going to be great to play at the Principality Stadium again. We were watching Wales win the Grand Slam there and we can’t wait to play ourselves.

“Some of us have played here before. We will be playing at the same ground that internationals have played on.

“It’s an incredible opportunity. Swansea are a great team. We’re going into it a little unknown this year. They got promoted last year. Normally we play them twice in a year, but this year we haven’t.

“I won my first Varsity, but I’ve lost the last two years so I’m hoping to leave on a win.”

Swansea University Women are riding high having competed in the Premiership this season after winning promotion last year. Their captain Jessica McCreery has promised her side will play entertaining rugby.

“On Wednesday we were up in Nottingham playing in the BUCS Big Wednesday Finals and we won,” she said. That bolstered our confidence and last week in a semi-final we beat another Premiership team 68-0. The last two games have been very positive and given us confidence.

“The season as a whole has been quite difficult as we have been promoted meaning we’ve played teams like Exeter and Cardiff Met who’ve been in the Premiership for the last five years.

“We like to play entertaining rugby and to throw the ball about. We have incredible speed out wide especially in our back three so we like to use them. We’re quite a small tea, but we are physical.

“We like to play so it will be free running rugby.”