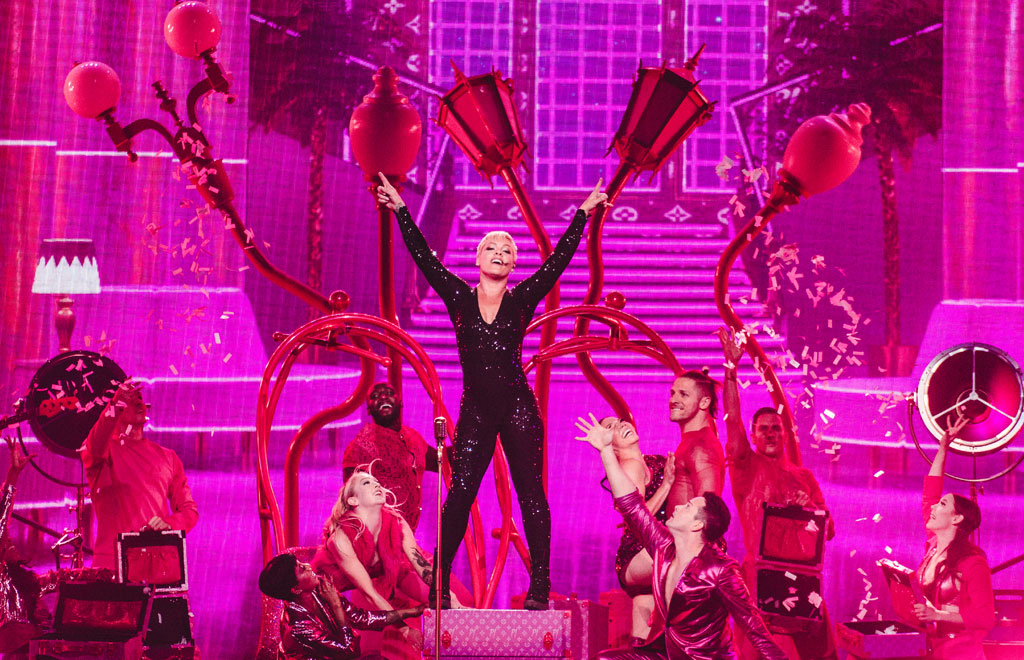 P!nk gets the party started in Cardiff

Famed for her immensely powerful and unique voice and her high-octane live shows, UK fans are in for a treat when she hits our shores next year.  Kicking off at Cardiff’s Principality Stadium on the 20 June, she then plays Hampden Park in Glasgow, Anfield Stadium, Liverpool, before bringing the UK tour to a close with two epic nights at London’s Wembley Stadium.

Tickets go on sale to the general public on Tuesday 23 October at 10 am.

American Express® pre-sale will run from 10am on Wednesday 17th October to 10am on Friday 19th October for all eligible Amereican Express cardmembers, T&Cs apply.

Verified fan pre-sale commences on Saturday 20th October at 10am.

P!NK’s Beautiful Trauma World Tour, which started in Phoenix in March 2018, has already seen her thrill audiences across America, Australia and New Zealand with esteemed music magazine Variety claiming “I can say without too much fear of hyperbole that, in decades of concert-going and reviewing, Pink’s is the most ‘holy f—ing s—‘ act of physicality I’ve ever seen as part of a pop show”. Aside from her acclaimed headline appearance at V Festival in 2017, these will be P!NK’s first live shows in the UK since 2013 and her first in Scotland since 2010.  She will also be among one of the first acts to play Liverpool’s Anfield Stadium.

Since her debut in 2000, P!NK has released 7 studio albums, 1 greatest hits album, sold over 57 million albums equivalents, over 75 million singles, over 2.4 million DVDs worldwide and has had 15 singles in the top 10 on the Billboard Hot 100 chart (four at #1).

In addition, she is the recipient of three Grammy Awards (19 nominations), one Daytime Emmy Award, three Billboard Music Awards, seven MTV Video Music Awards (including the 2017 Michael Jackson Vanguard Award recipient), two MTV Europe Awards, two People’s Choice Awards, was named Billboard’s Woman of the Year in 2013 and has sold out arenas all over the world.

Her seventh studio album, Beautiful Trauma is certified platinum, debuted at #1 on Billboard’s 200 chart and marked a career high for first week sales.  Additionally, the album debuted at #1 in 10 other countries, on Billboard’s Top Album Sales Chart and Digital Albums Chart.

The first single, “What About US” is also certified platinum, received a Grammy nomination for Best Pop Solo Performance and reached #1 on the Adult Pop Songs chart earning her ninth leader on the chart, the most number-ones at the format for a female (second overall).

P!nk will be joined on this tour by special guests Vance Joy, KidCutUp and Bang Bang Romeo.

Australian singer songwriter Vance Joy shot to fame with the hit single Riptide and has already had collectively over one billion streams on Spotify.

International DJ Kid Cut Up, has been opening for P!nk throughout her Beautiful Trauma World Tour dates so far. Creating unique remixes and edits, his work has been picked up by radio stations across the US as well as artists including The Chainsmokers, Diplo and DJ Khaled.

P!NK is a huge supporter of various charities, including: Make a Wish Foundation, Autism Speaks, Human Rights Campaign and No Kid Hungry.  She remains on the UNICEF team as an Ambassador.  She recently graced the cover of People Magazine’s The Beautiful Issue.