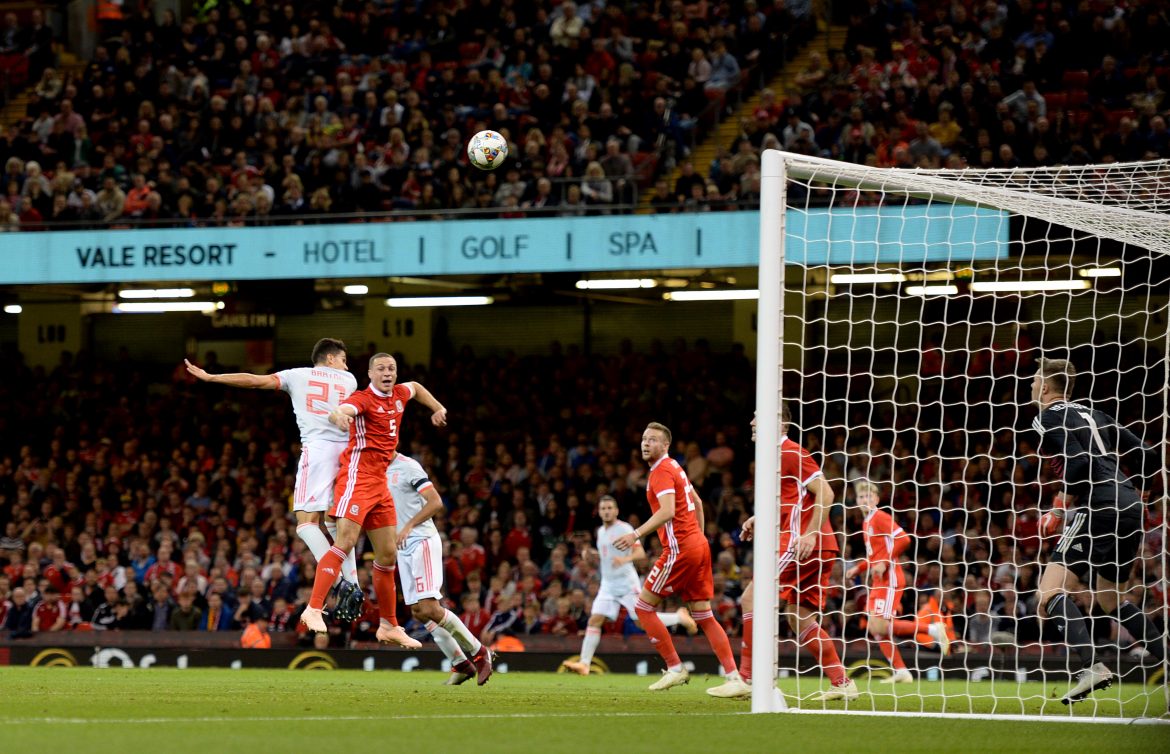 Wales’ first game at Principality Stadium since 2011 saw Ryan Giggs’ side go down to a 4-1 defeat to an impressive Spain outfit.

A brace of goals from Paco Alcacer either side of Sergio Ramos’ header put the dominant visitors in total command at the break with Wales guilty of defensive lapses.

In the second half, Luis Enrique’s Spain continued to dominate the ball and substitute Marc Bartra made the game safe.

Sam Vokes converted a David Brooks cross with two minutes remaining, but sadly it was just a Welsh consolation.

On a pristine Cardiff surface, Spain’s passing game was soon in evidence and they were ahead with just eight minutes on the clock. Alcacer was the scorer.

Wayne Hennessey punched a Spain corner half clear, but Wales didn’t totally alleviate the danger and when the ball fell to Alcacer, he buried the ball into the back of the net. Soon, it was 2-0.

Chris Gunter fouled Alvaro Morata with the Chelsea man running through on goal and the resulting free-kick was whipped in by Suso. Ramos was left unmarked at the back post and made Wales pay.  It was an easy header for a man as good in the air as Ramos.

Harry Wilson gave Wales their first bit of hope when he was fouled by Ramos and sent an audacious set-piece effort flying over the bar.

Spain were 3-0 up with less than half an hour on the clock.

More poor defending from Giggs’ hosts saw the ball rebound around the box and with Wales seemingly distracted by Morata on the floor, Alcacer volleyed home his second of the night. It was also Alcacer’s ninth goal in his last 203 minutes of action.

At the other end, Wilson won a corner and then delivered himself. At the back post Ethan Ampadu headed against David de Gea’s post but the Spain goalkeeper had the effort covered.

Giggs swapped captain Ashley Williams and Wilson for James Chester and Brooks for the second half while Spain made three changes of their own.

Goalkeeper Kepa Arrizabalaga, Koke and Bartra all entered the fray.

The injured Ampadu was the next to be replaced for Wales with Andy King stepping in before Alcacer headed over with a chance of a hat-trick there for the taking.

Suso was the next to go close, cutting inside on his left foot and unleashing a curling effort which clipped Hennessey’s bar.

Aaron Ramsey’s long-range effort – which was easily held by Kepa – was Wales’ response.

Giggs then made three more substitutions, Matthew Smith, Tom Lawrence and Jazz Richards tasked with some sort of revival mission in front of an impressive Cardiff crowd of 50,232.

It didn’t happen, Bartra making putting the gloss on Spain’s comfortable success by heading home a corner past a helpless Hennessey.

There was still time for the impressive Brooks to go on another mazy run and deliver for Vokes to score the game’s final goal, but the match had long since been decided.