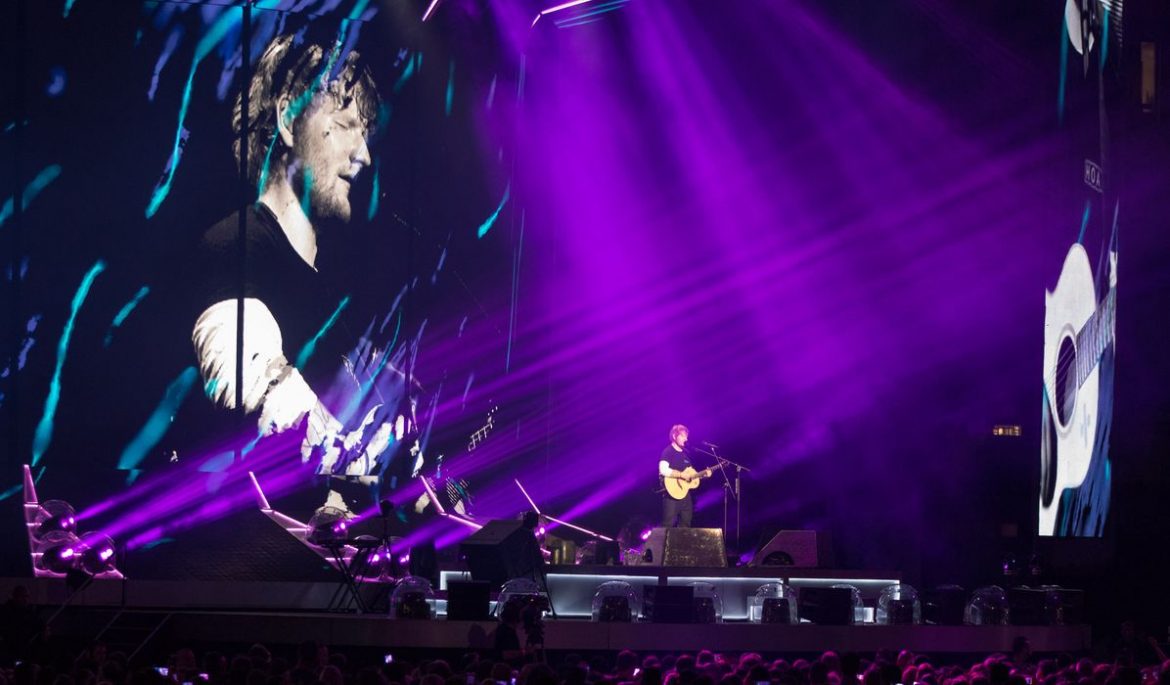 Waltzing on to the stage – actually waltzing is probably the wrong word as he later tells the crowd he is a rubbish dancer – in clothes that looked like he had recently visited one of the many charity shops resident in St Mary’s Street, the Suffolk-raised Yorkshireman had the crowd eating out of the palm of his hand by the third song of the evening.

The engaging Ed Sheeran possesses the ‘gift of the gab’ and the Cardiff fans lapped it up lock stock and two smoking barrels in the opening night of four concerts being staged at Principality Stadium.

After opening with Castle on the Hill and then Eraser he took a walk down memory lane with the fans.

“Hello Cardiff. I haven’t packed a gig in Cardiff since 2014 and it was a lot smaller than this,” he said. I’ve just done a big UK and Ireland stadium tour and this is by far my favourite stadium I’ve played.”

“I’m so excited because I know the Welsh are bloody nuts!”

Many critics have chipped away at Sheeran’s success but that can’t hide the fact he is just a polite, well-mannered and decent bloke enjoying what he does. It wasn’t that long ago he was busking the streets of London trying to make a quid and now he’s selling out stadiums world-wide.

He knows he can’t dance and he encourages everyone to sing their hearts out. “There is no such thing as ‘I can’t sing’. Everyone can sing, some just can’t sing in tune!”

“The whole point is to lose your voices – don’t worry about singing in tune, just sing loud.”

With Ed Sheeran, there are no gimmicks. It’s just him and his loop pedal and a guitar entertaining the fans.

“I have a deep love for Wales. I’ve come here and played a lot of shows, written a lot of songs here and always have tremendous amounts of fun,” he told the crowd.

“I had a gig at 18-years-old when I wasn’t that popular and I do find it nuts that we’re playing four nights at this stadium. I find it surreal.

“This venue has been on my bucket list to play because when you come to play in Wales, you play the student union and the Motorpoint and there’s a big gap after that.”

His mix of folk, rap and soul is a masterclass demonstrated perfectly why he should be considered one of the best entertainers around at the moment despite his detractors – I’ll even forgive him for saying how great it was to perform at the Millennium Stadium.

His set included songs from his early days like Sing and Thinking Out Loud to more recent tracks from his mega-selling Divide album.

He performed the final two songs in a Welsh football shirt with Bale adorned on the back yet still managed to look like the scruffy kid next door.

Finishing with Shape of you and You need Me, he thanked fans for coming out and wished them a safe journey home. You wouldn’t have expected anything less.