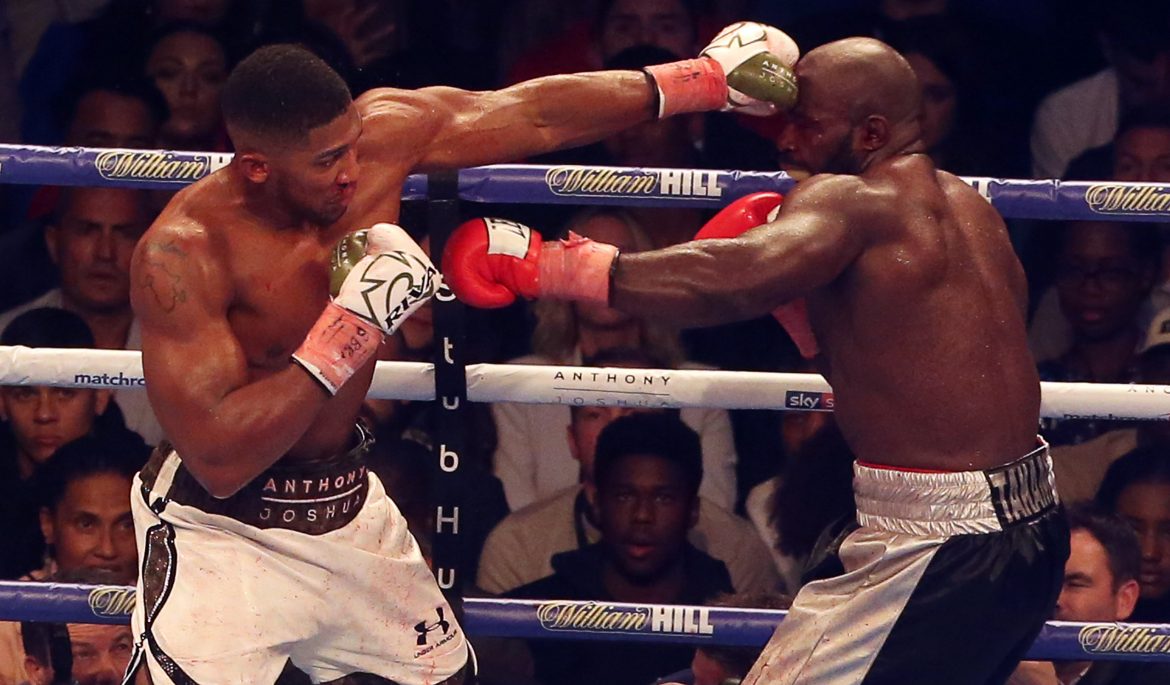 Anthony Joshua defended his WBA and IBF world heavyweight titles at the Principality Stadium against a stubborn Carlos Takam with a controversial 10th-round stoppage.

Most of the 80,000 in attendance would have expected the France-based Cameroonian to be jettisoned in the early rounds from the champion, having only had 12 days preparation after original contender Kubrat Pulev pulled out, but Takam gave a gutsy performance and was clearly distraught when referee Phil Edwards stepped in to end the contest.

With a clear height and weight advantage Joshua was in total control in the opening rounds and sent the contender to the canvas in the fourth round with a brutal hook, damaging Takam’s eye in the process.

Takam recovered his composure and although Joshua always looked the classier boxer, the challenger battled on, despite twice being inspected by ringside medics. Joshua was being pushed hard by the obdurate Takam, but the referee’s intervention ensure the 28-year-old finished the evening with 20 stoppages from 20 fights.

But as good as that record is, he produced a less than perfect performance which WBC champion Deontay Wilder would have viewing with interest. Joshua will know himself that he still has work to do to become the complete boxer.

Saying that, he did break his nose in the second round after clashing with Takam's forehead.

With the job at hand done and dusted, Joshua addressed the 80,000 crowd.

“What do you want, UK fans? Wembley, Cardiff? Las Vegas? I just want to keep the sport growing," he said over the microphone.

“I didn't have control of it, it was the ref's decision [to stop the fight]. Respect to Takam. He was like Evander Holyfield, ducking down, popping up.”

A bloodied Takam, was clearly bemused by the early stoppage.

Joshua and his promoter Eddie Hearn, now has a clear vision for the future, where they aim to unify the heavyweight division.

“AJ's told me he wants the belts. Deontay Wilder against Anthony Joshua has to happen,” said Hearn after the bout. “There's also a great heavyweight called Tyson Fury.

While the early conclusion to the fight annoyed a number of the fans inside the Principality Stadium hothouse, Joshua defended the referee’s decision to finish the fight prematurely.

“I don't care if I spark him out, it goes 12 rounds or the ref ends it,” said Joshua in the post-fight press conference. “People want to see the fighters I fight unconscious every time.

“I was delivering: I put him down, I hurt him, I slashed both of his eyes, he was bleeding. My shorts and boots were pure white and now they're pink. People wanted to see him unconscious and I was trying, but the ref's job is to let the fighter live on another day.

“Takam was showing the ref his eyes were nearly hanging off from the cuts, they were deep. When he was stopped he wanted to carry on: that's a fighter's instinct. Twelve rounds is fine, the stoppage is fine: I'm happy I got the win and can move on.”