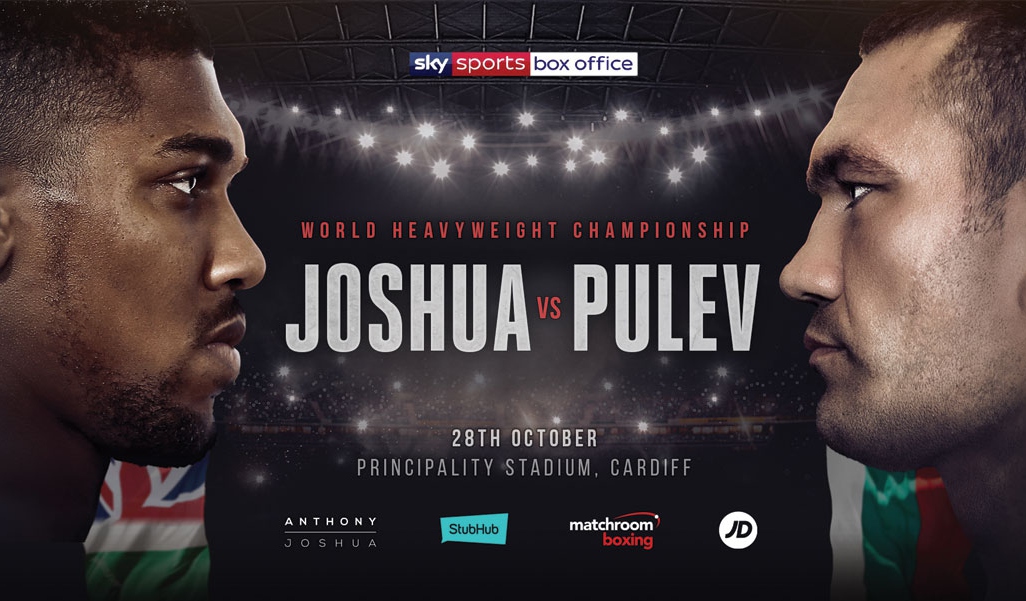 Joshua clashes with Pulev in Cardiff

Joshua returns to the ring following his epic battle with Wladimir Klitschko at Wembley Stadium in April where the Brit added the WBA strap to his IBF belt in an enthralling contest with the future hall-of-fame legend, climbing off the canvas to record an 19th straight KO win in front of a record-breaking crowd in London.

The unbeaten Olympic gold medal hero will now tackle his IBF mandatory Pulev, the Bulgarian rated number one in the IBF facing his second World title challenge having faced Klitschko for the IBF title in November 2014.

‘The Cobra’ became a two-time European champion after the fight with a win over Dereck Chisora, and the 36 year old picked up and defended the WBA Inter-Continental title with wins over two former World title foes of ‘Dr Steelhammer’ in Samuel Peter and Kevin Johnson.

“October 28 can’t come soon enough, I have been eager to get back in the ring since Wembley and now we are confirmed and ready,” said Joshua. “I’ll be locked away focusing on fight number 20 for the next eight weeks. I am excited to experience the atmosphere in a sold out Principality Stadium and aim to give the fans a spectacular night.”

“Anthony is a formidable opponent,” said Pulev. “We will not hug and hold, we will not run; we will stand and fight. His style fits mine perfectly and in boxing, styles make fights. My preparation will be very intense, and I will be perfectly ready when I enter the ring so that he will have no chance to beat me.”

“I’m delighted that we will be in Cardiff at the magnificent Principality Stadium for the next step of the AJ journey,” said Joshua’s promoter Eddie Hearn. “Nearly 80,000 will gather on October 28 to create another unforgettable night of boxing. Anthony will meet his mandatory challenger, number one ranked Kubrat Pulev and the card will be stacked with World championship action, domestic title fights and the very best young stars in the game. Get ready for the next episode from the biggest star in World boxing.”

“Anthony is a great champion and his last fight ignited the division,” said Pulev’s promoter Kalle Sauerland. “However, by his own admission, he is still learning and Pulev is not the sort of opponent you want to learn against. Kubrat and his train Uli Wegner – Europe’s most successful professional coach – have studied every weakness for the Cobra to strike victoriously.”

Mark Williams, General Manager at Principality Stadium which is owned and operated by the Welsh Rugby Union, said: “Our national stadium is a true Heavyweight when it comes to bringing major events to Cardiff and today’s announcement strengthens our status as a year-round, multi-events arena, in the heart of a city-centre renowned for delivering a Welsh welcome to visitors from around the world.

“This year we’ve hosted 400,000 plus visitors across UEFA Champions League Final, Speedway and the RBS Six Nations; two sell-out Coldplay gigs and Robbie Williams and Justin Bieber concerts. The boxing is guaranteed to another spectacle which, thanks to our Terraplas pitch covering, brings another world-class event to town two weeks before Wales’ Under Armour Series.

“2017 is undoubtedly our greatest year of events and we’re thrilled to be working with Matchroom Boxing to raise the bar yet again with the stadium’s fourth boxing event, and the first under the Principality Stadium name.”

An announcement on ticket prices and on-sale dates will be made this week and the first undercard fights will be released in the coming days.

Due to high-demand expected when tickets go on sale, the WRU is working closely with city partners in the build up to the big event. Stadium Manager added: “Cardiff truly comes alive on event day to and its down collaboration with our city-centre partners that we continue to secure and deliver events of this scale. We will continue to work with all partners in the coming weeks in preparation for October 28.”

The importance of advanced planning is the advice from the venue and all city-centre travel and transport providers.  Click here for more information which will be updated regularly.

As with all stadium events, there will be enhanced security checks in place and all ticketholders should expect to be searched on entry to the venue.

Visitors are therefore urged to arrive at the stadium in plenty of time, leave large bags at home and pay attention to the prohibited items listed at https://www.principalitystadium.wales/

More about the venue:

A crowd of 50,000 watched Joe Calzaghe defeat Mikkel Kessler under a closed roof in 2007. It was the Welsh-born boxers last match on UK soil and second victory at the venue after retaining his WBO super middleweight belt in April against Peter Manfredo Junior.

The Terraplas pitch covering will protect the Desso pitch, which intertwines grass turf with millions of artificial fibres, ahead of Wales’ Autumn Series.  The same tried-and-tested system has been used for concerts and motorsports since 2014. The same system has been used at Wembley Stadium for boxing events.