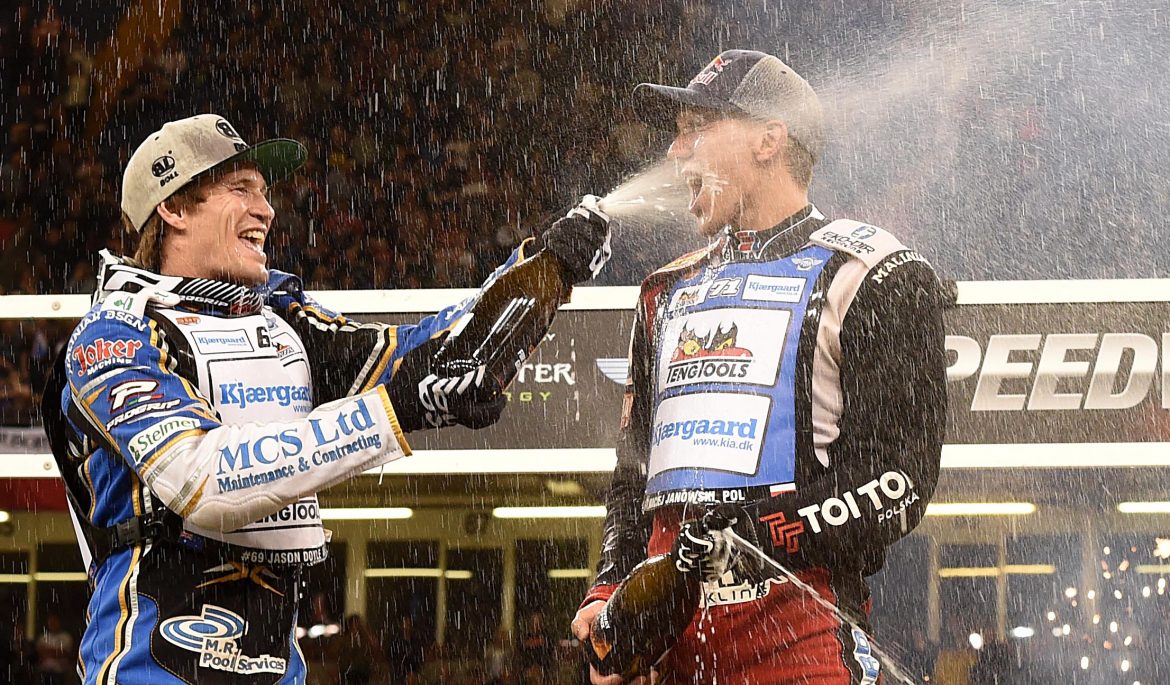 Doyle on 78 points now has a three-point cushion at the top, while Janowski overhauled compatriot Patryk Dudek for second place by virtue of his superior 2016 ranking, with the pair tied on 75.

With Janowski and Dudek now holding a 17-point advantage over Fredrik Lindgren in fourth place, the top three are setting a blistering pace with six rounds still to go.

Despite firing himself firmly into the title picture, Janowski knows there is still much work to do.

Asked how he rated his chances, he said: “I think we’ll all try and win it. But we still have six rounds to finish.

“Maybe someone else will fight for the gold in the end? All I know is I’m working hard at the moment and I’ll work even harder.

“We’ll see what happens next. We all know how it is in speedway. We can be so confident, but I need to stay focused and keep working hard. For now everything works. I need to keep that up and work a bit harder.”

Janowski was over the moon to become Poland’s first Cardiff winner. He said: “That is very special for me. There were a lot of Polish fans and it was crazy. They all supported me a lot and I got a lot of calls before the meeting. I will probably get a lot of messages now.

“Every win is special, so I am happy and I just want to say thank you to my team. We put in so much work and we all know how hard it is in the Grand Prix this year.”

Janowski revealed he took a huge chance with his bike setup to ensure he got the better of fellow countryman Zmarzlik, who topped the heat scorechart on 13 points and won his semi, but dropped a chain and retired while third in the final.

He said: “For the last heat, this will be a surprise for a lot of people but we changed the setup big-time. I knew Bartek was on gate one and he would make a really good start. I knew I needed to do something. We tried and it worked, so I am happy.”

Doyle was pleased to have ground a podium out of another night that started on the wrong foot – having scored just a point in his first ride, before falling in the next.

He said: “Apart from Horsens, I’ve started a couple of GPs not very well and I have really been digging deep. After the first couple of rides, I barely had any points and had to do it the hard way.

“I snuck into the semis again and fair play to Magic and Zagar. They were also good tonight. They had all the lines sorted out.

“I’m really happy with performance. I did it for everyone watching in my box. I thought I’d be sitting out of the semis, so I’m very happy with where I ended up.”

Doyle was delighted to extend his lead to three points. But he admitted:  “It’s a long way to go this season – there are another six GPs. It doesn’t matter where you stand at the moment.

“You just need to bang those points in and see where you stand at the end of the season. We’re all going to be pushing hard – it’s the GPs. It’s tough racing.”

Third-placed Zagar was pleased to put his season firmly on track with a 12-point haul that leaves him ninth in the standings – just one point off the top eight and 10 away from fourth place.

He said: “It’s very tough out there and you have to get everything right to be successful. I’m in a much better position now than I was at the beginning of the season. I’m pleased with that. I would just like to say the future is bright!”

World champion Greg Hancock withdrew from the meeting after heat one. He initially dislocated his shoulder when he fell down the stairs at his home in Sweden, and was unable to continue after it popped out during practice on Friday and on the first lap of heat one.

Next up is the Teng Tools Swedish SGP in Malilla on August 12.

The date for next year’s Adrian Flux British SGP will be revealed tomorrow, with tickets going on sale on Monday.