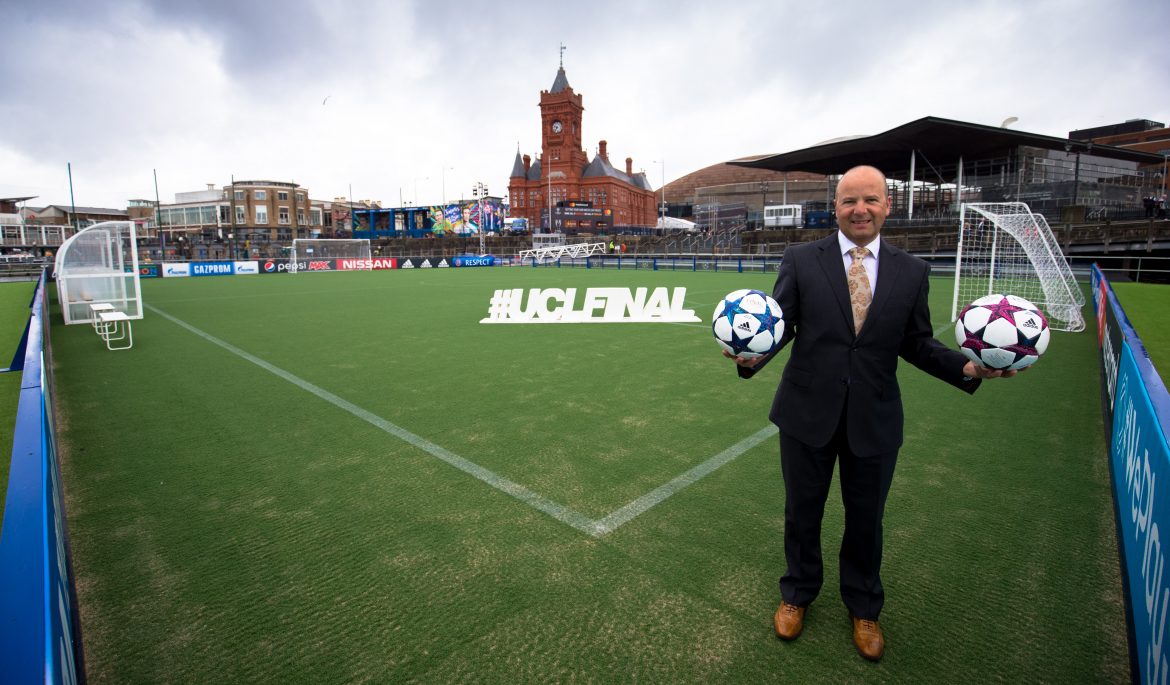 Bale’s Real Madrid lock horns with Juventus at the National Stadium of Wales on Saturday for the right to be named European Champions at the world’s biggest sporting event of 2017. Bale is aiming to become only the sixth player to lift the Champions League trophy in their hometown – and Ford is hoping that the Welsh star can net the winner to earn Real their third European triumph in four years.

“There is certainly a Bale factor this week, there’s a reason a huge poster of him is hung on one of the city’s landmarks. Let’s hope he’s fit, let’s hope he scores and let’s hope he gets the winner as well,” said Ford.
“I’m brimming with excitement for what has been three years in the making, it’s finally upon us, the Champions League final week. On Thursday 4th June we will see the women’s final at the Cardiff City Stadium before the men’s final on Saturday 6th June between Juventus and Real Madrid – the Italian giants versus the Spanish giants.”

Champions League fever is building in the Welsh capital as Cardiff Bay prepares to welcome around 200,000 fans for the UEFA Champions Festival. Some of the finest players to grace the European stage, led by Cardiff and Wales’ own Ryan Giggs, will showcase their skills on a floating football pitch in the heart of Cardiff Bay on Friday, as the centrepiece of the family-friendly Festival which runs from Thursday to Sunday.

The Cardiff City Stadium hosts the Women’s Final between holder Lyon and French rivals Paris Saint-Germain on Thursday evening (19:45 local time) before he eyes of the sporting world will focus on the National Stadium of Wales.

“We’ve always been very ambitious to get the top events, and we were delighted to be awarded the Champions League Final. This is the biggest sporting event of 2017, it’s a mammoth task to undertake and we have had a huge team in place,” added Ford.

“It could not be a better match for Welsh football with the strong connections to both of those clubs. And of course we have the Champions Festival, a free, family event in Cardiff Bay, where we expect to welcome 200,000 people. It’s going to be fantastic.

“So come on down, enjoy the Champions Festival, enjoy the Women’s Final and then wait for the spectacle on Saturday between Real Madrid and Juventus.”

Tickets are still available for the Women’s Final at only £6 per adult and £3 for children, while the Champions Festival is free for all to enjoy.

“We hope everybody comes down, enjoys it and wants to be a part of it. We’ve taken the trophies around the country, we’ve had school competitions going on to try and ensure this is not seen as a one or two day event in Cardiff,” said Ford.