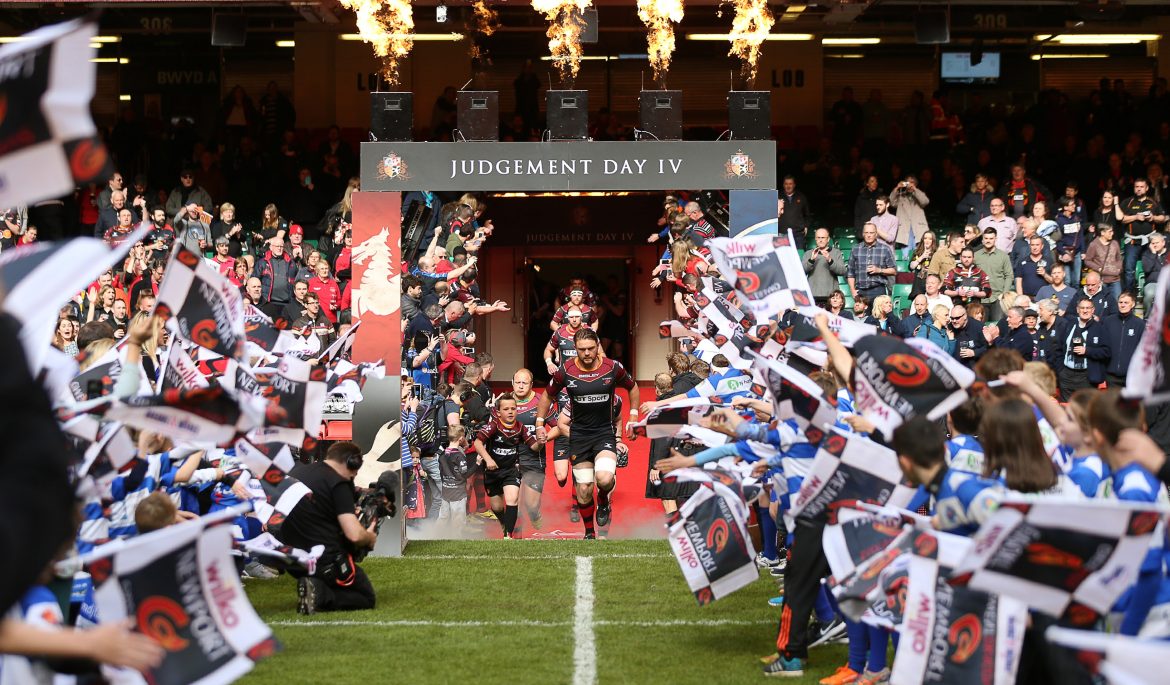 Coming to Judgement Day V? Here’s everything you need know from when gates open, to what’s happening at half-time and how you can get yourself bargin.

GATES OPEN, GET SETTLED IN
Gates will open 13:15 for the general public and all food and drink units will be open. There will be plenty to keep you entertained before the match starts including a special performance by Welsh duo and the Voice finalists, Into the Ark at 14:20. Don’t miss our giant video ball camera making it’s way around the stadium giving you an unique perspective of the crowd streamed to the big screen.

The Cardiff Blues and Ospreys will get the game started at 13:30 and will be welcomed onto the field by over 1000 junior players from the Blues region. Prepare yourself for blistering 40 minutes of rugby, as these two sides contain some of the best attacking talent in the Guinness Pro 12 with Matthew Morgan and Dan Evans rank 2nd & 4th in metres made.

HALTIME GAME 1 – GET REFUELLED
It’s a long day so make sure you get something to eat during the breaks. Why not check out one of special food and beverage units we’ve got in just for Judgement Day

The Grazing Shed
Recently voted the Number 1 Burger Joint in Wales, Grazing Shed have setup a pop-up burger bar on the East Stand of the middle tier next to block M2.

Mr Croquewich
Grilled cheese enthusiasts will excited to hear, pop-up specialists Mr Croquewich will be back for Judgement Day V. Try out one of their artisan grilled cheese sandwiches by visiting the South Stand of the upper tier next to block U17.

CoCo Gelato Ice Cream
Fancying something sweet? CoCo Gelato will be making their Principality Stadium debut offering a mouth-watering range of ice cream and desserts from the North Stand of the lower tier next to block L42.

GAME 1 DONE – GET READY TO PARTY

In between games 1 and 2 we’ve mansaged to get DJ Spoony back for a bigger and better live show than last year. The British garage DJ and former BBC Radio 1 will be performing throughout the day with a full set planned between matches including a special closed roof, choregraphed light show.

GAME 2 – DRAGONS V SCARLETS
The Newport Gwent Dragons and Scarlets will continue the festival of rugby, kicking off at 17:15. The Scarlets are battling it out for a place in the Guinness Pro12 play-offs while the Dragons players will be looking to impress Robin McBryde ahead of his Wales summer squad announcement.