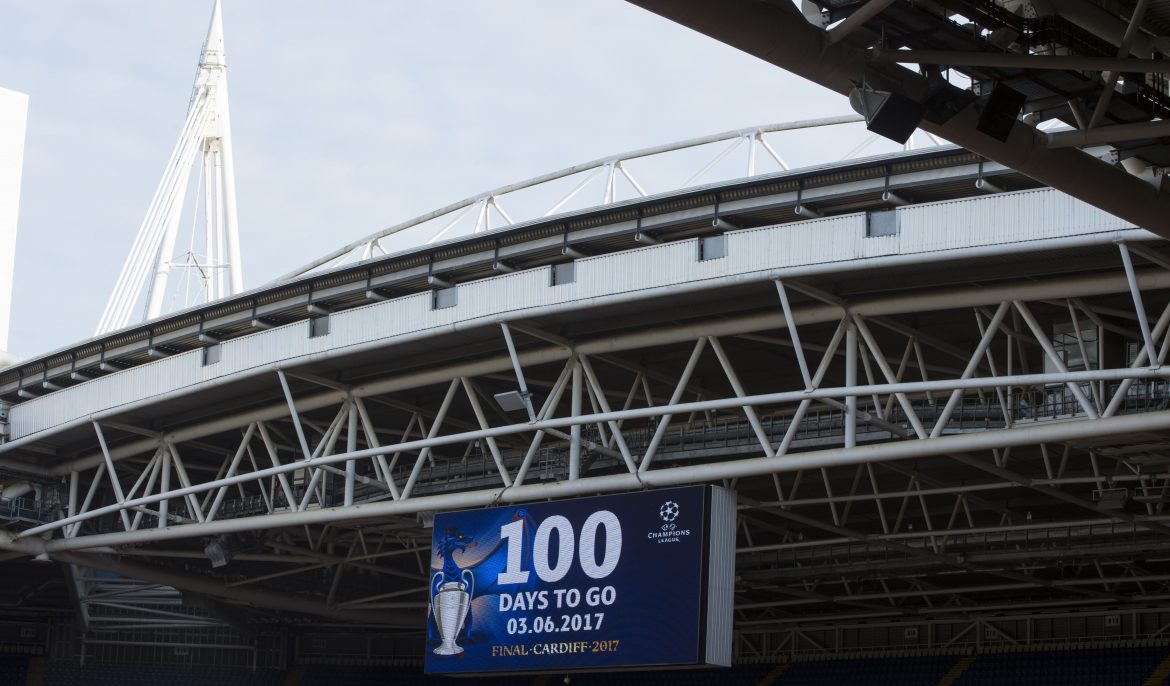 In 100 Days’ time, the National Stadium of Wales will play host to the world’s biggest sporting event of the year when the UEFA Champions League Final is contested in Cardiff.

Broadcast in over 200 countries, and with a live TV audience of 200 million, the UCL Final is the world’s most watched annual sporting event, and the largest ever to have been staged in Wales. While the remaining 16 teams left in the competition contest the coveted prize of a place in the Final on 3rd June, plans are well under way to ensure that the 2017 Final is the best final to date.

The coming 100 days will see excitement build across Europe as the tournament reaches its final stages, and fans get within touching distance of a trip to the Final in Cardiff. Within Wales, the prospect of welcoming two of the top teams in the world to the Capital, and having an opportunity to enjoy the incredible atmosphere that will spread across the city, will prove unmissable.

Martyn Phillips, Group Chief Executive of the Welsh Rugby Union which owns and operates the National Stadium of Wales, said: “Today is an exciting milestone in the stadium’s preparations to host the UEFA Champions League Final which will see the venue broadcast to more people, in more countries, across the world than ever before.

“Renowned for its unique city-centre location and electric atmosphere inside the venue, the stadium is the perfect stage for the most-anticipated football match of 2017. The UEFA Champions League Final is the latest and greatest sporting addition to our proud history of bringing more than 450 major events to Cardiff and everyone is looking forward to welcoming the finalists in 100 days.”

Jonathan Ford, Chief Executive of the Football Association of Wales said: “The 100 DAYS TO GO represents an exciting milestone in the countdown to one of the biggest events to have ever been staged in Wales, the UEFA Champions League Final 2017.

"An event of this magnitude affords us a tremendous opportunity to continue to grow the game here in Wales, and have a positive and long lasting effect on Welsh Football. Euro 2016 showed many people across Europe that Wales is a proud and successful footballing nation, to host the UCL Final twelve months later once again puts Wales on the map.

“The FAW, as Host Association awarded the event back in 2015, has cited qualifying for major tournaments and the staging of major football finals as core objectives of its strategic plan. Delivering against these objectives is a critical component of the ambitious commitment of the FAW to promote and develop football.

“While the footballing world turns its attention to Cardiff, it’s vital that we ensure that everyone here in Wales has the opportunity to feel part of this fantastic event. Over the coming weeks and months, numerous initiatives are being launched, including a Wales-wide trophy tour, school education programme, UCL themed 5-a-side National Cup competition, girls football festivals and many more, all designed to ensure the Welsh public feel part of the Final in Cardiff.”

Carwyn Jones, the First Minister of Wales, said: “To host the world’s biggest annual sporting event is a huge honour and I look forward to welcoming people from all over the world to Wales in 100 days’ time. Wales has a proven track record for successfully staging major events and I am confident we will once again rise to the challenge and provide a fantastically memorable experience to the thousands of football fans who will visit our capital city. For local people looking to get a taste of the UEFA Champions League experience, the Champions Festival, which will be staged in and around Cardiff Bay in the days leading up to the final, will give an opportunity to mingle with visiting fans and soak up the atmosphere.”

Cllr Phil Bale, Leader of the City of Cardiff Council said: “Cardiff is now firmly established on the world stage for hosting prestigious events and we are honoured to be the host city for the UEFA Champions League Finals
“In all the coverage of the Champions League matches – ‘the Road to Cardiff’ imagery and branding is clear to see and with only 100 days to go the excitement in the city is already building! The economic benefits will be significant, as the event is predicted to generate £45 million in benefits. We look forward to giving a warm welcome to the finalists when they arrive in the Welsh Capital.”

This week, the competition reached the midway point in the Round of 16. By 15th March, just 8 teams will remain, with quarter finals and semi-finals taking place through April and May.