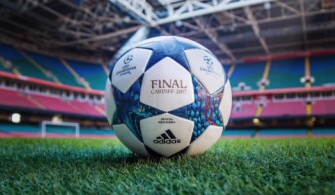 With the UEFA Champions League returning for its crucial final stages, the Official Match Ball that will be used as Europe’s best teams compete for the trophy has been unveiled.

Celebrating the nation of Wales, which will host this year’s final at the national stadium of Wales on June 3rd, the ball’s unique design features a striking dragon print – inspired by the national emblem, which famously features prominently on the Welsh flag.

The design takes on the power and strength the dragon represents in Celtic mythology – with the dragon print designed to represent the ferocity with which the final stages are played.

The ball also delivers the performance benefits required to match the standard of the players set to light up the latter stages of the competition – the likes of Messi, Bale, Suarez and Müller.

The Final Cardiff 2017 ball will be used on field during UEFA Champions League matches from 14th February up until and including the final in June.