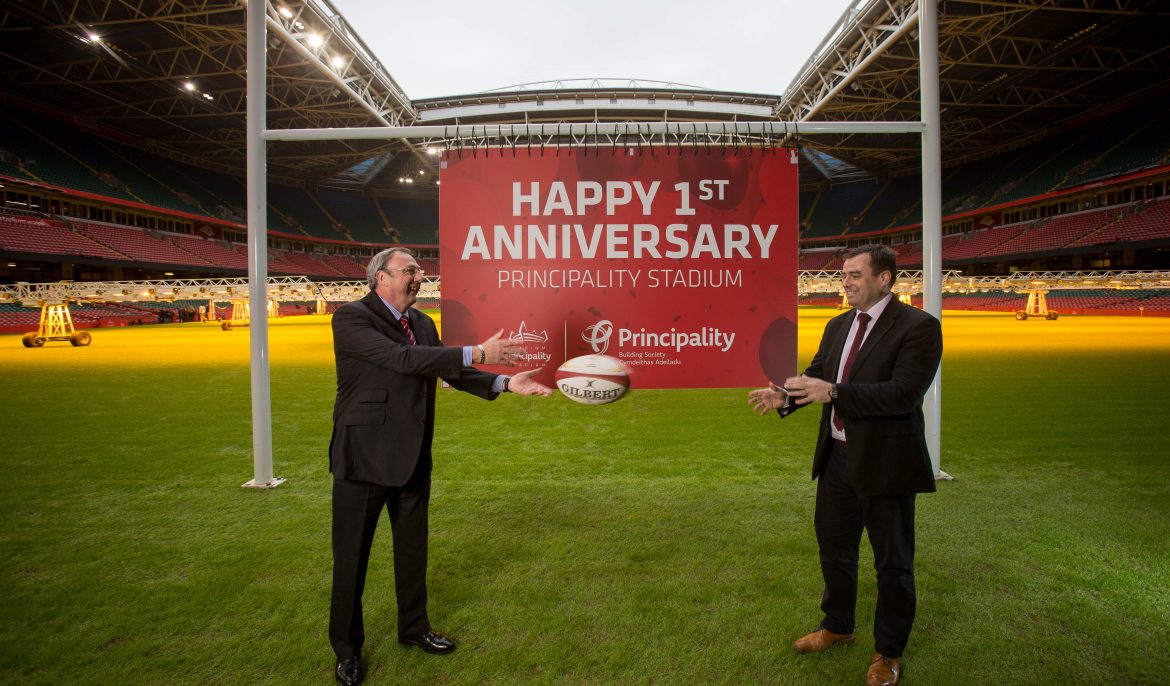 It is one year on since the launch of Principality Stadium and the partnership between the WRU and Principality Building Society has been hailed as a "huge success" by Principality Group chief executive Graeme Yorston.

The stadium was officially unveiled ‘Principality Stadium’ in January 2016 as part of a 10-year agreement with Wales’ largest building society. As well as re-naming the stadium, the partnership has delivered on its aim to benefit grassroots rugby, encouraging interest in the game within rugby clubs, schools and small communities across the country.

One of these keen youngsters included Sam Milligan, a school boy from Llanelli, who was given a special award by Principality for fundraising £2000 for Prince Philip Hospital’s cancer suite after his mother was treated there. The rugby-mad year eight pupil was given Principality’s Achievement Award from Wales international James King, and was treated to a tour of Principality Stadium and lunch in a VIP box alongside 23 classmates.

The partnership has also opened up opportunities for Principality Building Society’s 500,000 plus members who have been first in line for exclusive offers, early access to WRU tickets and other events at Principality Stadium through the Principality member only rewards scheme.

One Principality Member Rewards winner, Laura Fear from Gwaelod-y-Garth, was given the surprise of her life as Dan Biggar, Wales international outside-half, hand-delivered a pair VIP tickets to her home to watch the South Africa game last autumn. The Principality’s homeless charity partner Llamau also benefitted from the Principality partnership, with more than 50 people the Welsh charity helps receiving tickets to see Beyonce perform in Cardiff.

Group chief executive of Principality Building Society Graeme Yorston said: “This 10-year partnership, which includes the naming rights of the stadium as well helping Welsh rugby especially at grassroots level, has been a great success so far.

“It has created a greater awareness of the Principality brand both in and outside Wales and has also benefitted the communities our members live in, with 15 community events being held in Principality Stadium. However, the benefits go beyond rugby and sport.  We have linked with our charity partners to raise cash for their charities via ticket auctions and have also given people who might not otherwise have had the opportunity, to watch major events at the stadium.  Importantly, as a business owned by its members, we have also been able to give away almost a thousand tickets to our members to reward them for their loyalty.

“Our strong history of shared values with the WRU has helped drive the partnership forward and we’re excited to continue with this fantastic work.”

From Wales’ three home victories in the 2016 RBS 6 Nations, a box office smash Beyoncé concert, and the adrenaline pumping Monster Jam, the past 12 months at Principality Stadium has seen a range of events drawing huge crowds to Cardiff from across Wales and the world, generating an estimated £130m for the Welsh economy.

WRU Group chief executive Martyn Phillips said: “Our partnership with Principality Building Society has seen success on and off the field in its first year, with more than 600,000 supporters attending Principality Stadium events and greater opportunities for new and existing rugby supporters as Welsh Rugby looks to engage more people, more often, in the community game.

“The partnership is a great fit for Welsh Rugby and we remain proud to partner with a thriving Welsh business whose values are closely aligned to our own. Collectively we look forward to another great year at Principality Stadium, a venue which has already etched its name into the history books with a record-breaking win for Wales over Italy in the 2016 RBS 6 Nations, the highest attendance of regional rugby supporters at Judgement Day IV and Wales’ biggest Euro 2016 fanzone attracting more than 27,000 sports followers to cheer on the national football team.”

This year’s events calendar at Principality Stadium is already filling up, with music acts including Robbie Williams, Justin Bieber and Coldplay on the bill, and sporting events like Judgement Day V and the FIM Speedway Grand Prix set to pull in big crowds.