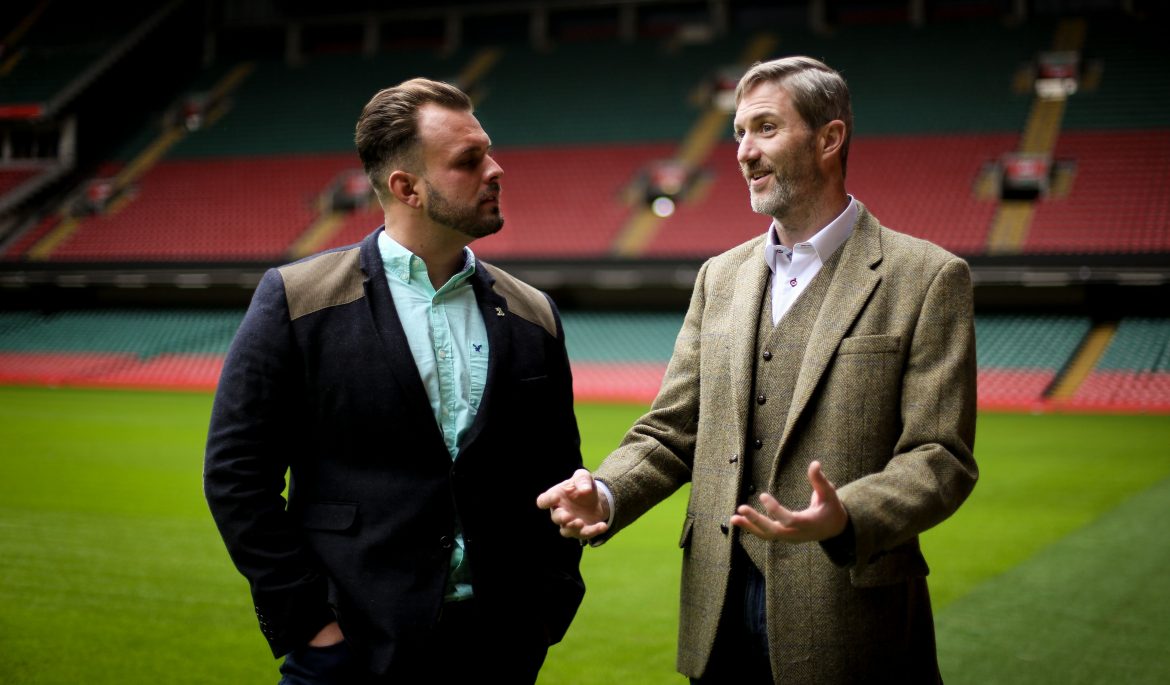 Principality Stadium has shown its support for ‘Go Green Day’ by unveiling the new pitch that will host Wales’ Under Armour Series matches against Australia, Argentina, Japan and South Africa next month.

As part of Wales’ day of action against climate change, Go Green Champions gathered at the stadium to launch the national fundraising day. These included Paralympic Gold Medallist Aled Davies MBE and Assembly Member Vaughan Gething, who were given the privilege of being the first people to check out the hallowed turf.

Hundreds of people are supporting ‘Go Green’ across Wales today as part of a charity campaign run by Size of Wales, which aims to help tackle climate change by helping to protect an area of rainforest twice the size of our nation.

Facilities Manager Darren Crossman, who heads up the sustainability remit at the multi-event venue, was keen to show his support and reminds us of the recycling that goes on all year round, in particular underneath the pitch which will provide the stage for some of the greatest players in world rugby in just over two weeks. He said:

“We’re always looking to improve our sustainability and are delighted to partner with a worthy charity, Size of Wales, to ‘Go Green’ by revealing our pitch as part of the national campaign.

“While today is exciting for sports fans wanting to get a glimpse of the new surface which is looking great ahead of the Under Armour Series, my consideration as facilities manager is to ensure our pitch is ‘Green’, from an environmental perspective, all year round.

“The pitch has a built-in drainage system for recycling the water which improves our carbon footprint and allows our fantastic ground staff and to keep the surface in tip top condition when the rugby takes centre stage from next month.”
To mark the national day of action, the stadium has also implemented the promotion of public transport to get to work and asked staff to wear green to raise money.

Claire Raisin, Director of Size of Wales said: “We’re so pleased to have Principality Stadium supporting this year’s Go Green Day. So many people have come up with amazing ideas to join in, and we hope the whole of Wales will go green!"

She continued: “If you’d like to take part, it’s not too late. You can follow everything on #GoGreenDay or go online to find out more and to make a donation at gogreen.sizeofwales.org.uk”

Sustainable action at the venue has earned Principality Stadium a nomination in the Sustainable Venue category of the Sustain Wales Awards. Members of the public can vote now at: www.cynnalcymru.com/online-vote/

Go Green Day comes just days after the announcement that £5million from ticket sales at the venue has been donated to community groups in Wales, via the Trust (MSCT). The venue also allows 15 local charitable and community organisations to use the venue free of hire charge per year as part of the Community Events initiative.