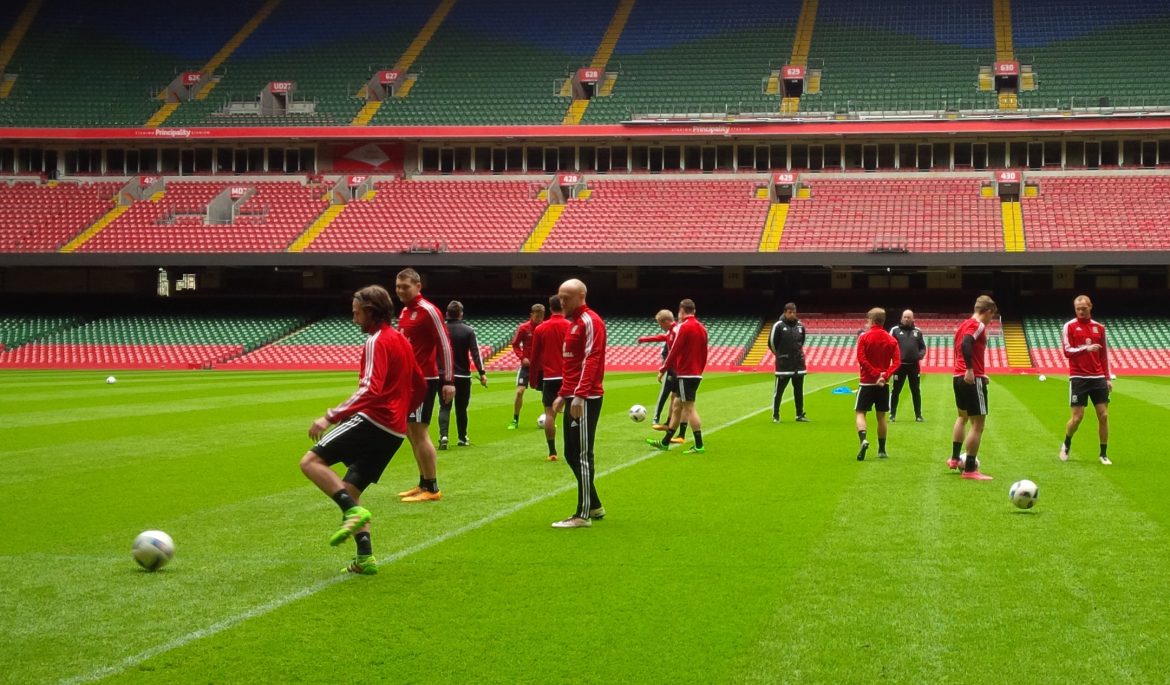 Wales’ football stars were the first to test out the venue for the 2017 UEFA Champions League final with a training session at Principality Stadium on the Easter weekend.

Chris Coleman’s men took part in a training session behind closed doors at the iconic Cardiff venue as preparations continue on the road to their landmark Euro 2016 campaign.

Wales’ first-team players such as skipper Ashley Williams and Joe Ledley hit the training pitch for the first time since the venue installed the hybrid Desso Grassmaster pitch system in November 2014.

The training session marks the first time the top-quality surface has been prepared to Champions League specification. It took place at the 74,500 capacity venue following their 1-1 draw with Northern Ireland and ahead of last night's clash with Ukraine.

During the training session, Wales manager Chris Coleman said: “As a squad we were delighted to take a training session to the Principality Stadium. I went down to have a look at the facilities recently and even when empty there was this fantastic aura about the stadium.

“More importantly in terms of match preparation the pitch was in excellent condition and ideal for our sessions ahead of our trip to Kiev to face the Ukraine. Many of the squad had not been on the pitch before and all thoroughly enjoyed the opportunity to train in the stadium."

The nation's footballing heroes blazed the trail for a host of charity footballing events which will be played at Principality Stadium after the Easter weekend. Football players from communities all over Wales will take the UEFA-rated stage as part of the venue’s Community Events scheme.

Principality Stadium Manager Mark Williams commented: “With Euro 2016 on the horizon, it’s such an exciting time for Welsh football and we’re delighted to support the FAW in their preparations for such a huge occasion in the history of the international sport.

“I’m really pleased with the great feedback and the clear benefits to all involved over the Easter weekend. Our groundstaff have been liaising closely with Chris Coleman to ensure the team were happy with the facilities on offer. For us, this was a great partnership exercise with FAW and an exciting look forward to our preparations to host UEFA Champions League next year.”

Six soccer games will be played on the hallowed turf next week, representing a range of charities such Football Aid and fixtures including Cardiff Community Cohesion Cup between South Wales Police and the Somali Community on 30th March and a Wales Veterans match on 3rd April.

Mark added: “As we gear up to run another six football sessions on the pitch this week, I hope the news our international football visitors over the Easter bank holiday will help to boost the excitement levels of all the footballers we’ll see running out on the pitch and raising significant funds for charity.”

The annual Community Events initiative invites 15 not-for-profit organisations in Wales to bring their events to the world-class sporting arena, free of the hire costs associated with major commercial bodies.