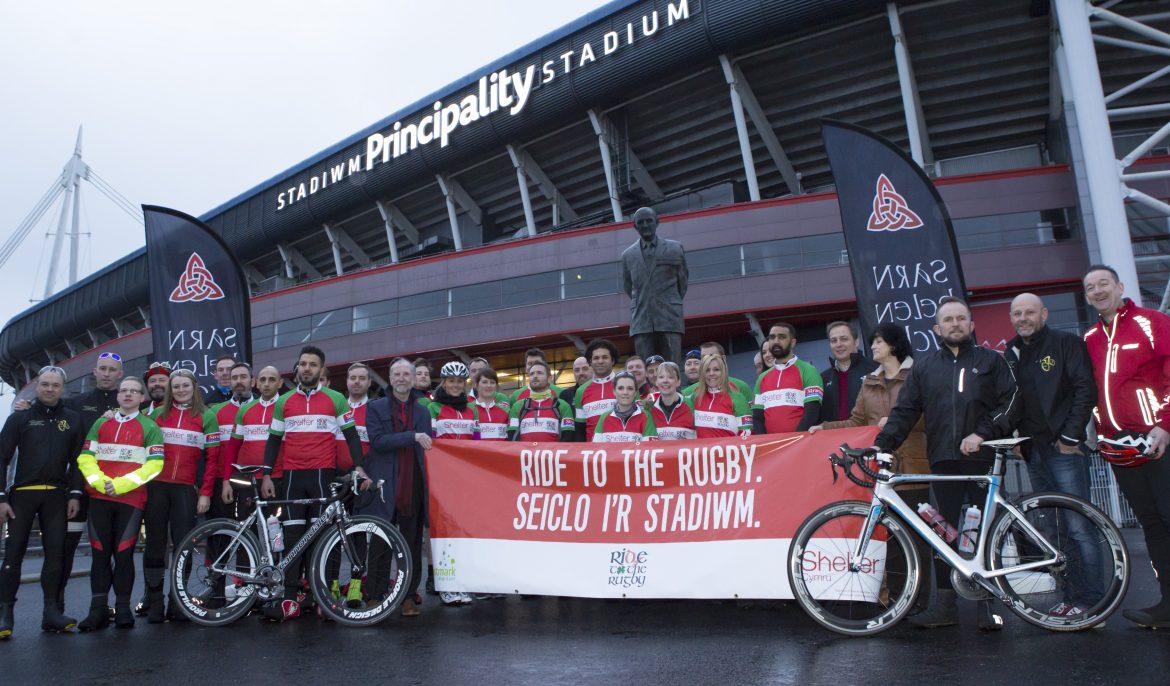 Principality Stadium hosted its first Community Event when Shelter Cymru set off on their ‘Ride to the Rugby’ from the iconic rugby venue today.

The annual ‘Community Events’ scheme allows charitable and community organisations from across Wales to host their own events at the home of Welsh rugby.

The Welsh Rugby Union, which owns and operates the stadium, approves up to 15 events per year for not-for-profit organisations to enjoy the facilities without the venue hire fees.

Ride to the Rugby is a charity bike ride from Principality Stadium to Dublin’s Aviva Stadium ahead of Wales’ opening RBS 6 Nations match against Ireland.

Captained by former Wales skipper Colin Charvis, 30 cyclist set off on a 200+ mile bike ride early this morning in support Shelter Cymru’s work to put an end to homelessness in Wales.

The cycle challenge is the inaugural Community Event at Principality Stadium following a 10-year partnership with Principality Building Society to invest in Welsh rugby at all levels.

As part of the celebrations, the WRU and Wales’ largest building society are running a joint social media campaign to encourage the public to #makemorememories at the iconic venue.

“The home of Welsh rugby plays a significant role in the hearts of the nation thanks to the fantastic support from the various communities who have shared in an exciting history of events,” said General Manager Mark Williams, who oversees all stadium events including the upcoming RBS 6 Nations matches against Scotland, France and Italy.

“The Community Events initiative allows us to give something back to Welsh communities, by allowing them to bring their own events, and to make more memories, at Principality Stadium.”

Speaking of the first of 15 Community Events, he added: “It is a pleasure to welcome Ride to the Rugby challengers back to the venue. The team of cyclists, led by former Wales captain Colin Charvis, has a tough couple of days ahead as they make their way to Dublin for Wales’ first Six Nations match. Their dedication and commitment to raising significant money for charity is fantastic. They’re also huge supporters of Welsh rugby and it’s entirely fitting that they’re leading the charge with the inaugural Community Event at Principality Stadium, a partnership with Principality Building Society which has the interest of Welsh rugby at the heart.”

The Shelter Cymru fundraisers are among over 200 Welsh communities to benefit from the Community Events scheme since the stadium first opened in 1999. Last year, the fundraisers rode the 300 miles from Cardiff to Paris to watch Wales beat France in the Stade de France, raising £96,000.