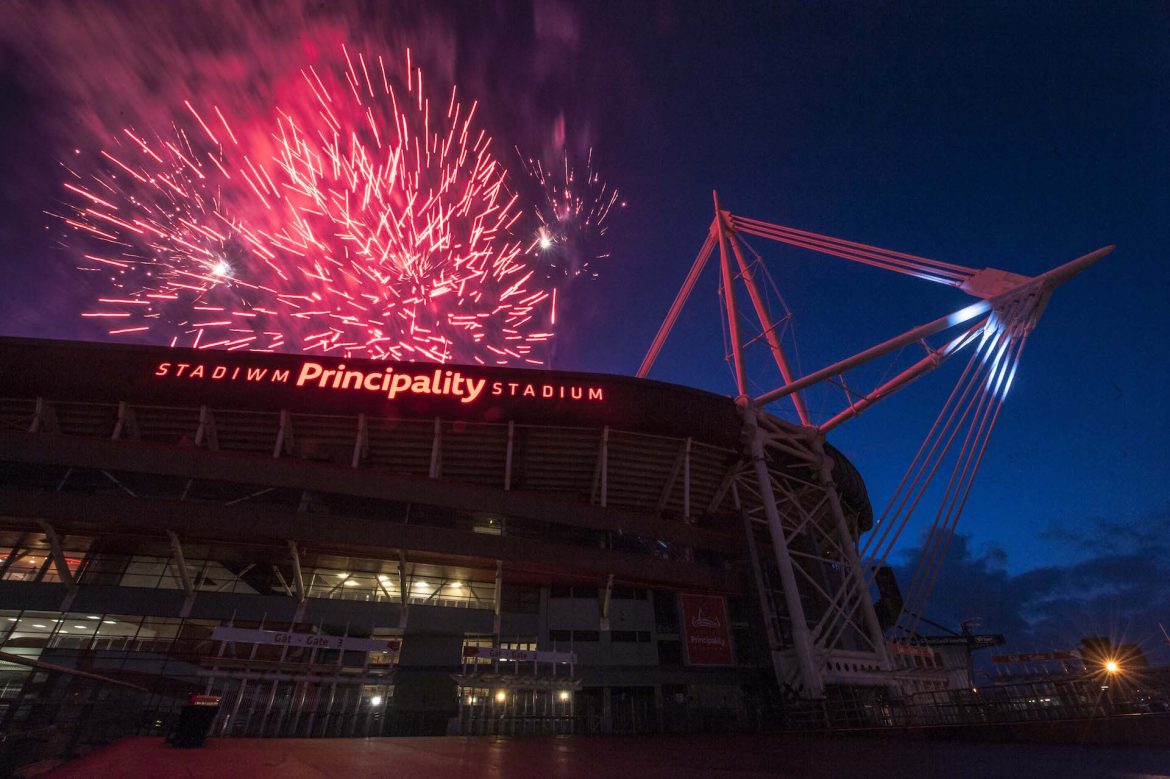 Principality Stadium has been officially unveiled by Wales head coach Warren Gatland to signal the start of an historic 10-year investment in Welsh rugby by Principality Building Society.

The partnership between the WRU and Wales’ largest building society sees Wales’ iconic home ground renamed Principality Stadium with the overarching aim to develop and grow rugby in Wales at all levels.

The two-time British and Irish Lions coach was the first to switch on the lights of the new external signage at the venue, lighting the sky with the words ‘Stadiwm Principality Stadium’ followed by a spectacular firework display.

“The national stadium is a very special place for everyone involved in Welsh rugby and it is a great pleasure for me to be here for the official opening of Principality Stadium,” said the head coach whose tenure includes two Grand Slams and three RBS 6 Nations titles.

“I’ve said it before, but the stadium is simply the best rugby stadium in the World and as a squad we can’t wait to play at Principality Stadium in the Six Nations over the coming weeks.

“The partnership with Principality Building Society will benefit the whole game from grassroots right through to the elite and it is great to have their support to help grow the game over the next 10-years.”

“Today marks a new era for Welsh rugby in the opening of Principality Stadium and the start of a positive 10-year partnership with the team at Principality Building Society, who have provided great support of the community game in Wales,” said the WRU Chairman.

“This new partnership is a boost for all levels of Welsh rugby, with reinvestment in rugby communities and individuals who dedicate so much of their time, energy and passion to the sport.

“The partnership is also a key factor in our vision to encourage more people to engage with rugby, more often, providing more enjoyment and success on the field.

“I am delighted to celebrate a strengthening of our relationship with one of Welsh rugby’s key partners and I want to thank Principality on this landmark day for their continued support.”

Former Wales international and current U20s Manager Mark Taylor, who was the Stadium’s debut try scorer in
Wales’ historic win over South Africa on 26 June 1999, and triple Grand Slam winning Welsh international Ryan Jones were also among the guests at the event.

The two-day celebration also includes a festival of grassroots rugby which will see under 7s teams from across Wales becoming the first people to step out on the hallowed pitch tomorrow (Saturday January 23).

Principality has invited players representing Bridgend Sports, Dulais Valley, RTB Ebbw Vale, Treherbert and Wrexham who have been selected for their commitment to the development of rugby both on and off the field.

The young players will be accompanied by their parents and will take part in a skills session delivered by WRU Coach Core Apprentices and national squad representatives followed by autographs and an exclusive Q&A.

Graeme Yorston, Group Chief Executive of Principality Building Society, said: “This partnership provides substantial support to nurture future rugby talent and grow the grassroots game at all levels in Wales, whilst providing substantial benefits for our loyal members, our savers and borrowers. It will also bring substantial economic benefits to our country – with a range of exciting events and concerts being held at the Stadium over the next 10 years.

“We are proud to put our name to the home of Welsh rugby – a home that truly belongs to the nation and is at the heart of Welsh life.

“Principality has been part of the fabric of Welsh life for more than 155 years, helping people to prosper in their homes, and it is important to us to stay true to these roots and continue to invest in our heartland to support the communities in which we and our customers live and work.

“We hope that Principality Stadium will be a place where unforgettable memories are created, where the passion and pride of Wales will be witnessed in all its glory.”

As well as being the home of Welsh rugby, the multi-purpose venue plays a central role in Welsh life. Supporting local community events and attracting major music concerts and high profile business events to the area, the Stadium actively generates more than £130m for the local economy each year.

The WRU shares a long and proud history with Wales’ largest building society, dating back to 1969 when the first partnership between the two parties offered Principality Members some of the first WRU debenture seats.

From 2001 the building society sponsored the WRU’s main knock-out cup competition later progressing to become the ten year title sponsor of the Premiership division in Wales in 2005.

Wales’ first international match at Principality Stadium is the sell-out clash with Scotland on Saturday 13 February.  Earlier this week, Gatland named his 37-man squad for the 2016 RBS 6 Nations.