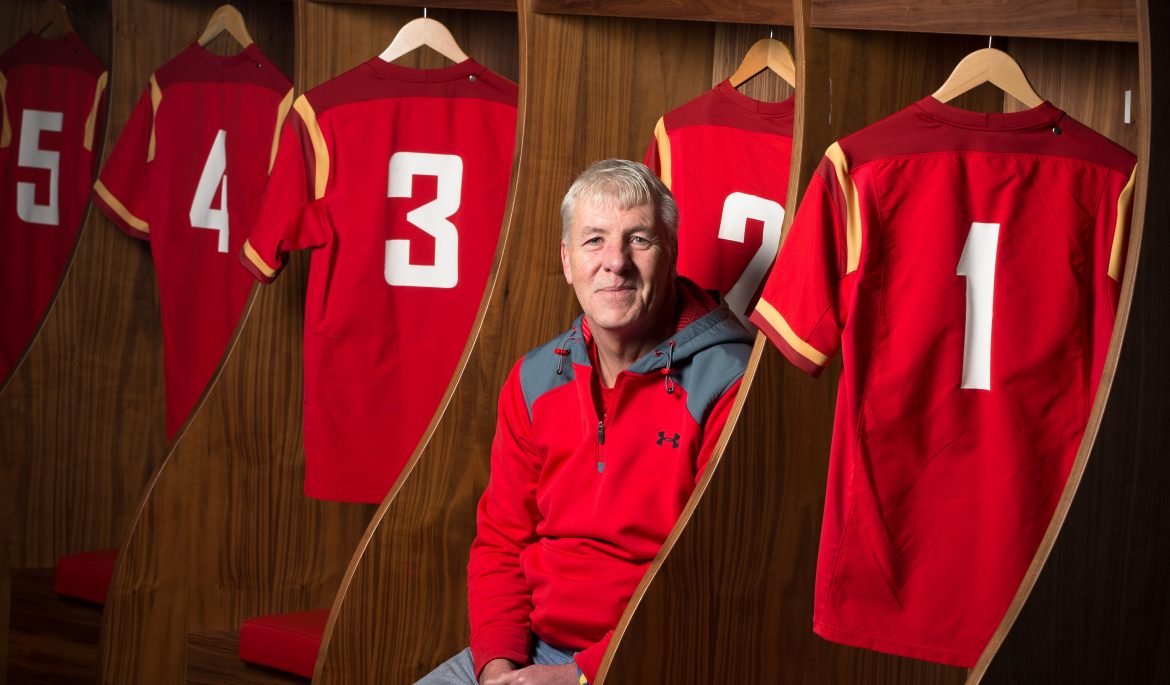 Family at heart of stadium memories

In the countdown to the launch of Principality Stadium on Friday 22 January, the Welsh Rugby Union is celebrating the people who have worked behind-the-scenes across a memorable 16-years history at Wales’ national stadium.

Charity Officer Julie Thomas, Baggage Master John Rowlands and Stewarding Manager Caroline James have each worked at the WRU since the venue opened with an historic first win over South Africa on 26 June, 1999.

The campaign urges fans to share their own memories, uploading videos, photos and text on social media platforms using the hashtags: #makemorememories and #principalitystadium.

Julie Thomas, from Caerphilly, joined the WRU as a receptionist in 1987 and worked across retail and referees administration before taking on the role of Charity Officer 10 years ago.

Julie oversees the charity bucket collections at stadium events among other supportive initiatives. These collections alone have raised more than half a million pounds for charitable causes at Wales’ home rugby matches.

Julie also helps the hospitality team in the prestigious President’s Lounge on matchday, where she has met a long list of VIPs including the Duke and Duchess of Cambridge.

When asked about her memorable occasions, Julie spoke fondly of the Welsh Rugby Charitable Trust, which raises funds for players who have been seriously injured in rugby, and Patron of the Trust, Prince William.

She said: “The injured rugby players are a very special group of men who despite their injuries still laugh and have fun and enjoy watching the game. Prince William is the Patron who comes along when he can to attend events and once a very spontaneous little 2-year old called Ruby, with her red dancing shoes, presented him with a bouquet and asked could she dance for him and he said “of course”. That was a once in a life time thing to witness and he made it a very special day for all of the lads in the room who in their own right are also very special.”

The memory Julie holds closest to her heart is when her husband of 38 years, former Cardiff player David Thomas, was awarded a WRU President’s Cap for his role in Wales’ 18 – 24 win over USA on tour on 10th May 1980.

Her proudest moment at the WRU was standing alongside David’s parents for the official Cap presentation which took place before Wales’ Dove Men Series clash with Fiji at the Millennium Stadium on 15 November, 2014.

“My proudest moment was witnessing my husband being presented with a President’s Cap in the President’s Lounge, a room where I would usually work and welcome the guests. To be welcomed along with my husband and his parents and to have the Cap presented by the WRU President Dennis Gethin brought a tear to my eye and certainly to his parents’ eyes. Being a big rugby family, it was very special.”

John ‘JR’ Rowlands joined the WRU in 1982 as member of the groundstaff at the National Stadium, Cardiff Arms Park. Originally from Ely, he lives in Rhiwbina with his wife Elizabeth who also used to work at the WRU as a receptionist for 13-years.

JR became part of the National Squad when he took up the post of Baggage Master more than 20 years ago. He has since travelled the world managing squad logistics and experiencing the highs and lows of the last two decades of Welsh rugby.

His best memories feature the Millennium Stadium’s inaugural match, Wales’ first win over South Africa on 26 June 1999. He also recalls the first of three Grand Slams for Wales in 2005 at the venue and Gethin ‘Melon’ Jenkins’ notorious try celebration against Ireland.

“I’ve got a couple at the home of rugby,” said JR. “The first one is when the stadium opened. We played South Africa and Mark Taylor scored the first try and was awarded a ring for being the person to score the first try. We went on to win the game, which was very pleasing!

“The second one is a Grand Slam when ‘Melon’, Gethin Jenkins, scored a try and when Ronan O’Gara mentioned something to him he threw the ball at O’Gara as if to say, “Yeah, we’re one nil up!””

Yet just like Julie, JR’s fondest memory is a time away from the international rugby celebrations. It is an occasion spent with his family during the annual Santa Tours event at the iconic venue.

The father of two to Cerys and Bethan and grandfather to Brioni and Sonnie recalls his grandchildren’s faces when they met Father Christmas in the magical Santa’s grotto – when the rugby venue becomes a winter wonderland for Christmas visitors in December.

Caroline James, who lives in Llanrumney, has been the stewarding manager since the dawn of Millennium Stadium. She was there for initial recruitment of 1500 stewards when the venue opened at full-capacity for Rugby World Cup 1999.

Caroline talks about how the stadium’s charm has attracted two generations of stewards – many parents and their children – wanting to be a part of the 750-strong safety and security team on event day.

“Over the years we’ve had around 8,000 apply to work here and now we’ve been open more than 16 years we’re starting to recruit the children of some of the older stewards. There’s a great family atmosphere among the teams which is a pleasure to be a part of. I consider so many of them my own friends and there’s been great times over the years as they have built strong friendships with one another, taking holidays together and travelling to away matches in groups.”

Caroline also looks after the stadium’s Community Events, an initiative which has allowed more than 250 Welsh charitable or community organisations to host their events at the stadium without hire charge.

Following a varied list of events which include the longest knitted scarf display, a slumber party for more than 200 Brownies and charity football, the scheme now sets out to make more memories at Principality Stadium for 2016.

In the countdown to the launch of the new name on Friday, the WRU will continue to release memories across a rich history of world-class sport and entertainment. Watch Julie, JR and Caroline and others on WRUTV here