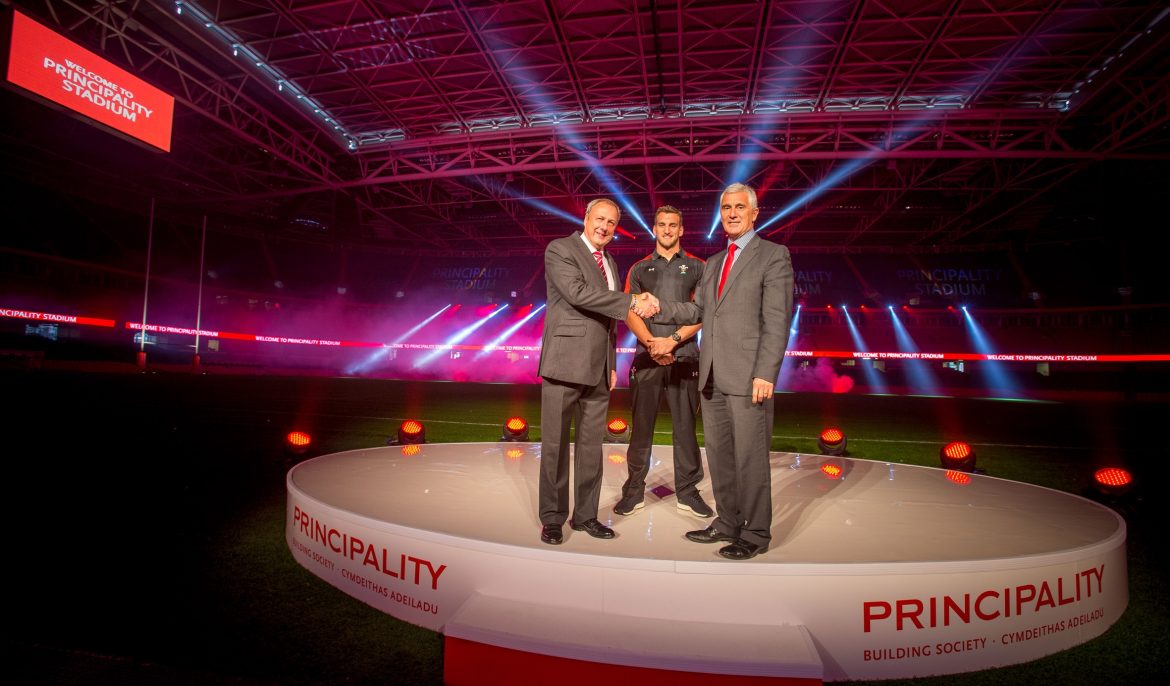 Principality Building Society and the Welsh Rugby Union have entered a new ten year partnership which will help encourage, develop and grow Wales’ national game at all levels, to be marked by the renaming of the national stadium of Wales in January 2016.

The partnership underscores Principality’s on-going commitment to Welsh rugby and communities across Wales and will open up further opportunities for its 500,000 plus Members, customers and employees who will receive exclusive offers, early access to WRU tickets and money-can’t-buy experiences at the home of Welsh rugby.

The WRU shares a long and proud history with Principality, Wales’ largest building society, dating back to 1969 when the first partnership between the two parties offered Principality Members some of the first WRU debenture seats.

From 2001 the building society sponsored the WRU’s main knock-out cup competition later progressing to become the ten year title sponsor of the Premiership division in Wales. Today’s announcement further strengthens its commitment to Welsh rugby at all levels and safeguards the long-term health of the nation’s sport.

In recognition of this support, the home of Welsh rugby, which has become an iconic symbol for Wales around the world, is to be renamed ‘Principality Stadium’ from January 2016.

The first match to be played in the newly christened national ground will therefore be Wales’ home Six Nations second round clash with Scotland on 13th February.

The renaming opens a new chapter in the history of the Cardiff venue which has been called the Millennium Stadium since it opened on 26th June 1999.

At the heart of the 300 rugby clubs throughout Wales, the Stadium unites clubs, schools, colleges and Welsh communities. Hosting rugby at all levels, from school and community cup finals, grassroots and regional games through to the senior international team, the iconic building represents the pride and passion of Wales.

As well as being the home of Welsh rugby, the multi-purpose venue plays a central role in Welsh life. Supporting local community events and attracting major music concerts and high profile business events to the area, the Stadium actively generates more than £130m for the local economy each year.

Both Member-owned and member focussed the WRU and Principality Building Society work hard to deliver value and prosperity to their stakeholders.

This new alignment symbolises the coming together of two of Wales’ most revered and trusted organisations with over a hundred years of history to unite them.

The Chairman of the Welsh Rugby Union, Gareth Davies, said: “Principality Building Society has been a great supporter of the game at the semi-professional level since 2005 but from now on its name will have a new resonance in every community in Wales.

“Securing a new partner and doing so with such an important and respected Wales-based organisation is a big step forward for us all. Both the WRU and Principality are intrinsically linked with people from all points of the compass in Wales and the renaming of the Principality Stadium will emphasise that strategic alignment.

“The Stadium enjoys a worldwide reputation and has become an international symbol for our nation so it is highly appropriate that one of our principal partners now has even stronger links with Welsh rugby through these naming rights.

“I am delighted the home of Welsh rugby will now be called Principality Stadium under this historic new deal.

“And this moment should also not pass without a debt of gratitude being offered to the Millennium Commission, whose contribution to the building of our new national stadium at the end of the last century was recognised in its original naming.”

The Group Chief Executive of the Welsh Rugby Union, Roger Lewis, said: “This is a landmark day for Welsh rugby and our long association with Principality Building Society.

“Principality Building Society is a high profile business with an important place in Welsh society and we are proud to now be associated even more closely.

“Welsh rugby is far more than our national sport in that the game has come to epitomise our place as a nation on the world stage.

“I want to thank the team at Principality and single out our WRU Head of Sales and Marketing, Craig Maxwell, and his colleague, Simon Rowe, who have worked so hard to achieve this fantastic commercial partnership.”

Group Chief Executive of the Principality Building Society, Graeme Yorston, said: “As a business that is owned by our Members, we are committed to the communities in which we operate. This partnership is about investing in the development of rugby at all levels, providing opportunities for people to prosper through sport and creating memorable, unrivalled experiences for our Members and communities.

“Becoming the official sponsor of the home of Welsh rugby is an important statement about our ambition.

“We are committed to growing and investing in the Building Society to ensure that we remain relevant for both current and future Members, while also staying true to our Welsh roots.

“It is hugely important to us and our Board that we find the right vehicles to promote the Principality brand inside and outside of Wales.

“This partnership perfectly reflects our ambition – supporting the local communities that we serve and engaging with a younger audience while raising the awareness of our brand on a national and global scale by putting our name to the world stage.

“We share a strong history of shared values with the WRU and we are delighted to put our name to the home of Welsh rugby – a home that truly belongs to the nation and is at the heart of Welsh life.”

Principality has committed to extend its support of the Premiership division until 2016/2017.

A major operation will now commence to rebrand the venue as Principality Stadium in time for the 2016 RBS 6 Nations.

It will shortly host eight Rugby World Cup international matches including two quarter finals, under the existing name Millennium Stadium, before officially being unveiled under its new title in January next year.

In 2017 the UEFA Champions League final will be played at the Stadium.