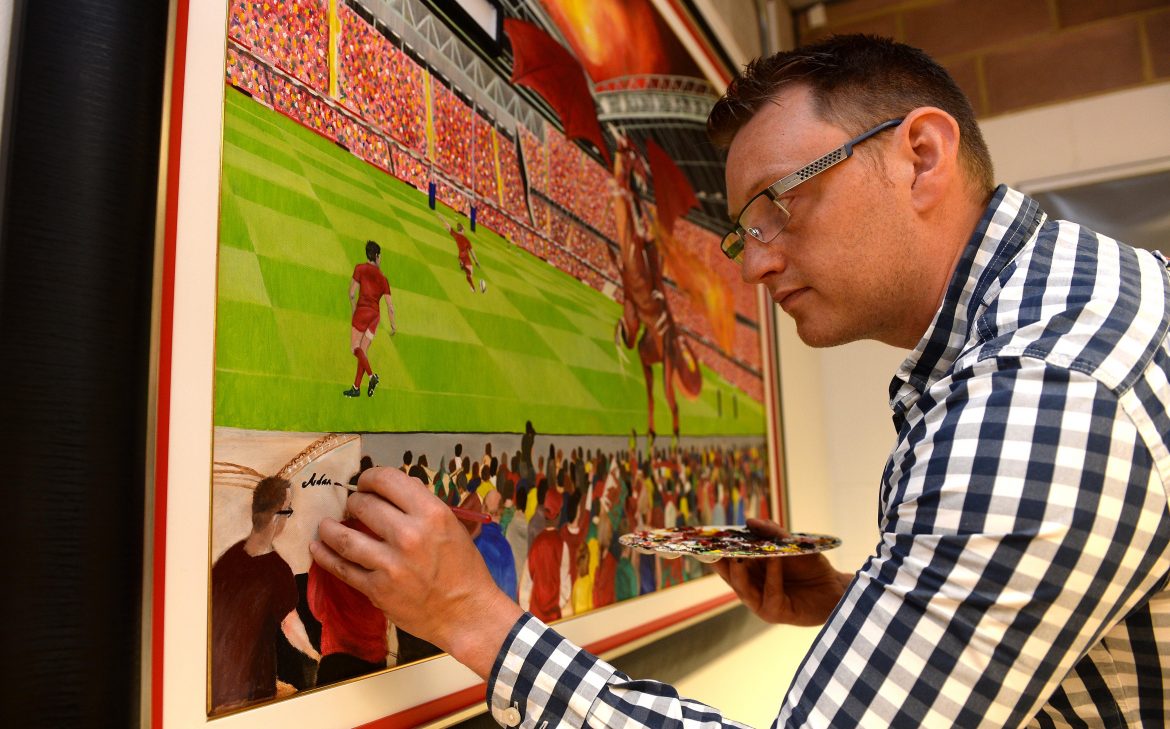 Welsh artist Aidan Chiselle has put the finishing touches to a painting to celebrate Wales in action at the national ground ahead of the Rugby World Cup 2015.

Inspired by the Welsh Rugby Union mascot Scorch, the completed painting shows Dragon presiding over a Wales home match in front of capacity crowd at the Millennium Stadium.

‘Portrait of a Dragon’, was created live from the heart of the action when Wales faced Australia in the Dove Men Tests; with initial research and pencil drawings in 2013 before committing to paint in 2014.

The finished artwork is not match specific. The artist has added a quirky score board which can be modified to show the final score at any Welsh rugby international.

With 85 days to go until RWC 2015, the painting has been revealed at the Millennium Stadium which will host eight matches including two of Wales’ pool games.

The 5ft by 6ft oil on canvass, gifted to the WRU, will hang in the Media Centre at the multi-event venue in time for Wales’ Dove Men Tests against Ireland and Italy in the build up to Wales’ World Cup campaign.

The Tournament, the third largest sporting event in the world, is expected to attract media from all over the globe including over 1,000 press, photographers and broadcasters.

Chiselle, who lives in Rogerstone and has exhibited in both Cardiff and London, is known for his fine detail and realism. Aidan is currently working on a number of celebrity portraits ahead of a solo exhibition.

He explains his initial inspiration for the project – the WRU Dragon Scorch which features so prominently on the national Stadium's big screens on matchday, keeping everyone up to date with the scores and all the match action from the big screens.

“The WRU’s digital mascot Scorch is so prominent at Welsh rugby internationals and proved a big inspiration from the outset. It also provided a fresh challenge for me; as while my true passion for drawing started out with wildlife sketching, I’d never worked on a dragon before!

“With ‘Portrait of a Dragon’ I wanted to represent the atmospheric ‘roar’ of Welsh rugby internationals inside a Millennium Stadium full of rugby supporters. As a Welsh rugby fan, it is one of the most exciting projects I’ve ever worked on and I am grateful to the WRU for welcoming me into the inner sanctum at the home of Welsh rugby.

“Having researched, planned and created the painting here at the Millennium Stadium, it is with great pleasure that I have gifted the piece to the WRU to display alongside other great imagery of rugby culture in the media centre ahead of such a significant rugby occasion, that is the World Cup.”

WRU Head of Communications John Williams said: “This project reminds us that Welsh rugby is part of the fabric of our nation and as such plays an important role in so many cultural and creative projects.

“Aidan has worked incredibly hard to produce such an impressive piece of art in ‘Portrait of a Dragon’. Sharing such unique matchday access at Welsh rugby internationals with a gifted local painter has been a pleasure.

“It is fantastic to receive the finished oil painting to display inside the Millennium Stadium’s media centre where the areas of culture, media and sport meet across a range of sporting and entertainment event.”