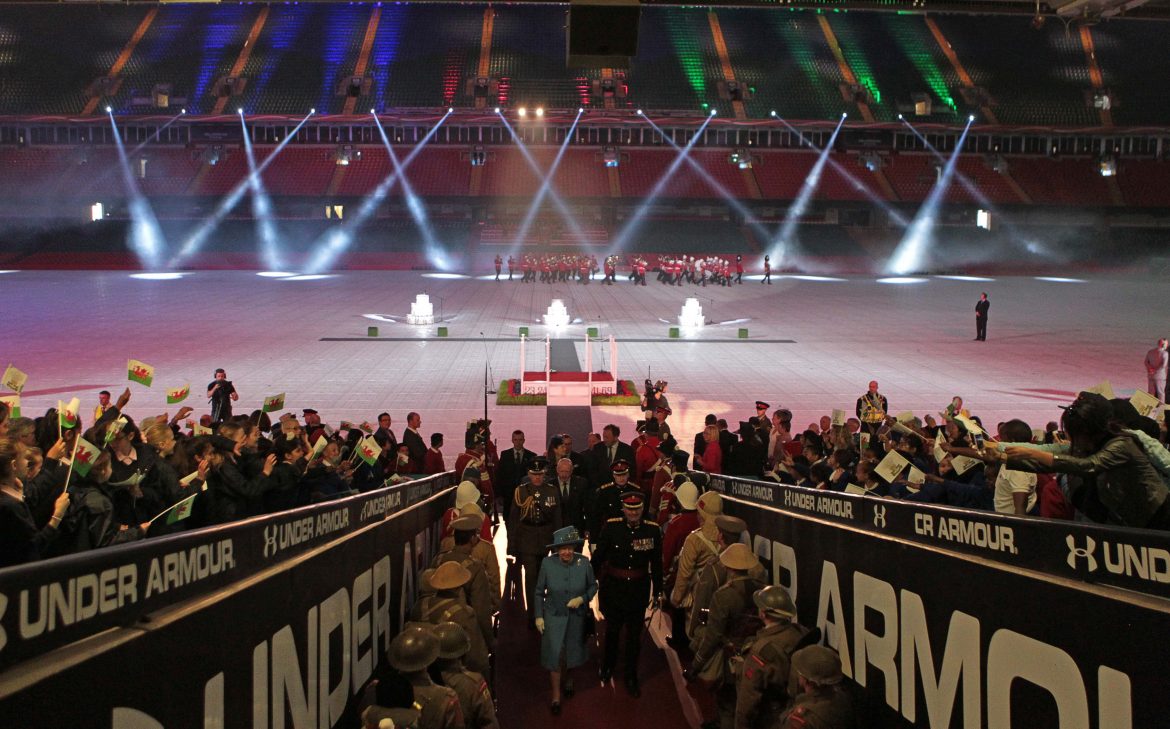 The Royal Welsh marked one of its most historic and prestigious days when Her Majesty Queen Elizabeth II presented the regiment with new colours at the Millennium Stadium.

Their Colonel in Chief arrived by Royal train and Brigadier Philip Napier, Colonel of The Royal Welsh, accompanied Her Majesty onto the dais to take the salute.
The Queen addressed the stadium before taking the salute:
“It gives me great pleasure to present these new colours to The Royal Welsh here in the Millennium Stadium and to see so many of the regiment, your friends and families and the comrades associations gathered to witness and to enjoy this occasion.
“As your Colonel in Chief, I am also delighted to know that the City of Cardiff has granted the regiment the Freedom of the City. This generous honour typifies the support that the people of Wales have given to its regiments over the years and I know this enduring link has been a great source of strength and encouragement, especially so during the regiment’s recent operational deployments to Iraq and Afganistan.
“These operations were conducted in the most testing of circumstances and it is with considerable pride in you that I say that you rose magnificently to the challenges that you faced, in the way that your forebears have always done, with conviction, good humour and courage.
“The values and ethos which you espouse are embedded within the fabric of these colours and I trust that they will continue to provide confidence and inspiration to you and your successors. I therefore entrust these colours to your safekeeping, to be with you wherever you may be in the service of our country.
“I wish you all good fortune in the future and I will follow your progress with great interest.”
Lieutenant Colonel Paul Clayton, Commanding Officer 1st Battalion The Royal Welsh, said:
“We are in the heart of Wales and it means so much to the regiment. It’s about showing off the soldiers to the people of Wales because they are their soldiers.
“It’s not every day we have our Colonel in Chief in attendance and that, combined with marching in the Millennium Stadium just after receiving the Freedom of the City, makes this a very special day for everyone involved and we will remember this always.
“The sound of the three cheers to Her Majesty was resounding.”
Brigadier Napier said the day marked a significant milestone in the regiment’s long and distinguished history.
“Today has just been an extraordinary privilege and something we have looked forward to for a while,” said the former head of the Army in Wales.
“The Royal Welch Fusiliers and the Royal Regiment of Wales amalgamated in 2006 and today is about bringing that to a close, presenting new colours to a new regiment, but which also serves in taking forward all that history, all that pride and having our soldiers continuing to contribute so much.

“This is very special for the soldiers and we look forward with real ambition.”