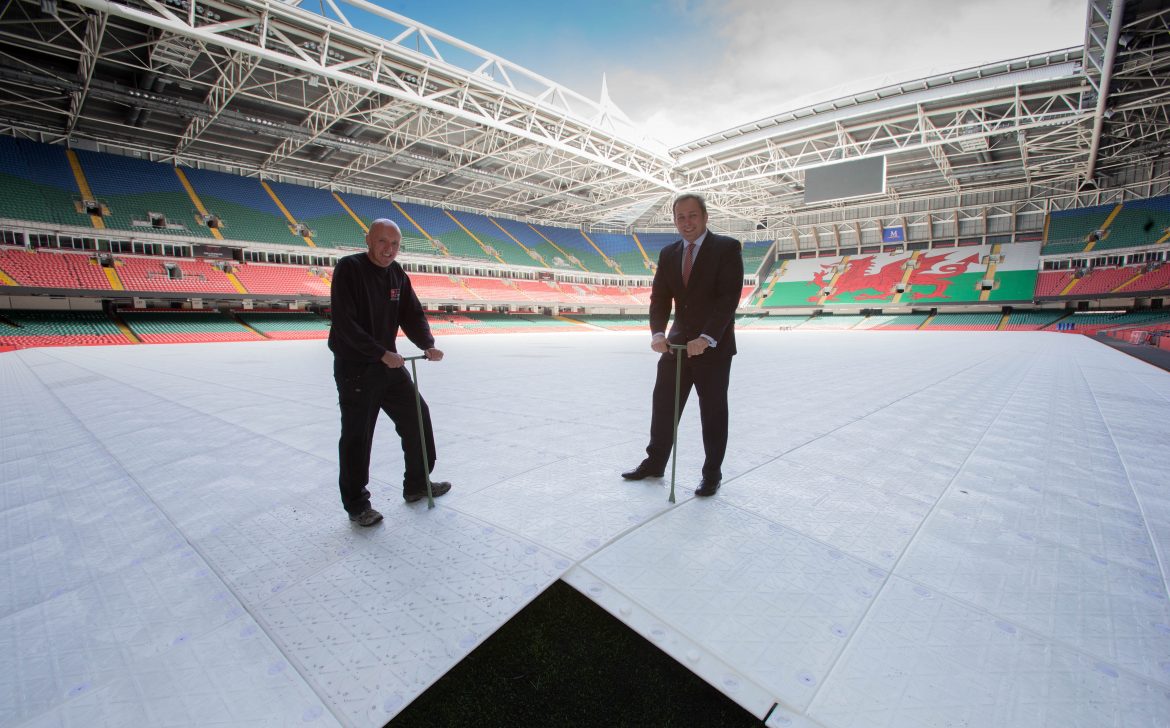 Stadium covers up for summer

A unique Millennium Stadium make-over has been revealed in time for the summer season of events at the iconic city-centre venue.

The first-ever pitch covering has been installed on top of Welsh rugby’s hallowed turf which this season staged victories over South Africa and Ireland ahead of Rugby World Cup 2015 which brings eight matches to Cardiff.

The top-of-the-range Terraplas system, made up of 8678 tiles and measuring 10500 square metres, will provide a protective cover for the hybrid pitch and enhance the stadium’s flexibility as a multi-event venue.

The world’s biggest pop band One Direction will be the first to put the new flooring to the test when they bring their impressive stage rig and over 100,000 dancing fans to Cardiff across two concerts on Friday 5 and Saturday 6 June.

The Terratrak Plus ® is a high-density polyethylene surface which functions as a temporary drivable roadway for heavy duty vehicles and cranes. It will take a static load of 758.8 tonnes per square metre, the equivalent to an armoured fighting vehicle.

While still protecting the synthetic and natural grass below, the translucent natural material allows the passage of light for photosynthesis to continue when the grass is covered for up to four days. When the covering is left for a longer period, new grass will be sown to restore perfect pitch conditions at the home of Welsh rugby.

The dramatic transformation from world-class rugby venue into Europe’s largest indoor arena was made in just over 24 working hours.

The new system replaces the old palletised pitch which previously took up to a week to remove.

Stadium Manager Mark Williams has hailed the arrival of the modern system during an exciting year at the stadium. He said:

“This is a brand new era for Millennium Stadium events as we welcome the very-latest in stadium flooring solutions to revolutionise the transition between what we term ‘pitch’ and ‘non-pitch’ activity at the venue.

“The new system opens up the opportunity to deliver non-pitch events at any time of the year while also preserving the conditions of the pitch below and ensures that the Millennium Stadium can continue to attract a diverse range of events to Wales.

“For the stadium groundstaff, the operational and logistical benefits are tremendous as we no longer need to remove and install over 7,000 turf pallets during a summer season.

“Next month One Direction will bring an impressive stage rig and thousands of dancing fans to test out the stadium’s new floor followed by the British Championship Speedway Grand Prix which will look very different again!

“Fast forward another few weeks and the stadium will look like a world-class rugby stadium once more as Wales prepare for Rugby World Cup 2015 with the Dove Men Tests at home against Ireland and Italy.

“2015 is going to be a memorable year. I’m confident that our pitch system and Terraplas covering has given us a robust and sustainable platform so we can continue to concentrate on delivering the very best experience whatever the event.”

The installation is the final phase of a £3.1 million project which was launched at the start of the season to reveal a hybrid pitch, which intertwines millions of artificial fibres with grass turf, and state-of-the-art 'plug and play' facilities for media.

The major investment was fully supported and part-funded by the Welsh Government in readiness for Rugby World Cup 2015, which includes two of Wales’ pool matches and two quarter finals in Cardiff