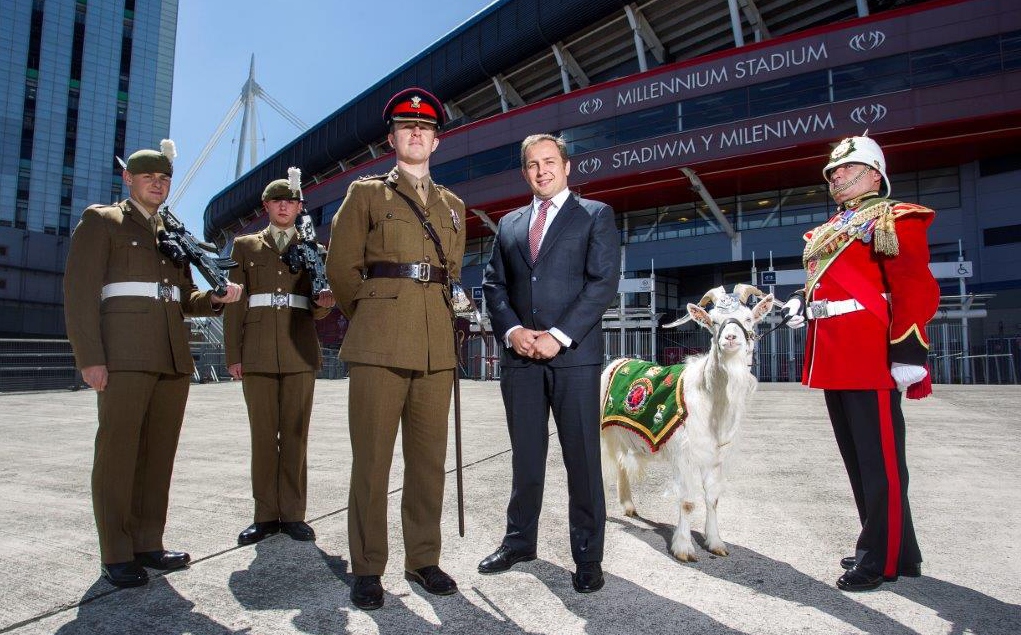 Royal Welsh to be presented with new colours

The Royal Welsh can officially announce that public tickets for the Presentation of New Colours event on 11 June at the Millennium Stadium are now on sale.

The Royal Welsh, one of the most experienced Armoured Infantry Regiments in the British Army, will be conducting a large scale military parade including over 600 Soldiers, Officers, Cadets and Comrades from across Wales in Cardiff this summer, 11 June 2015.

The Royal Welsh will be marching from Cardiff Castle, through the streets of Cardiff City Centre and into the Millennium Stadium.  The Regiment will then be presented with new colours, Regimental flags, by a member of the Royal Family.

For the Regiment it is the final formal recognition of The Royal Welsh who were formed in 2006 – following the merger of two great Welsh Regiments, The Royal Welch Fusiliers and the Royal Regiment of Wales. This will be by far the largest and most important event the Regiment will stage for decades to come. The Regiment intends to take this opportunity to not only display our pride in representing the Welsh nation but to also thank the Welsh people for their continued support, not only recently in Iraq and Afghanistan but also over the centuries.

This is a very important event which will allow us all to celebrate our shared Regimental History and also, importantly allow all of our Regimental family to focus on the future, united under our new colours as members of The Royal Welsh. This transition will ensure that the honour and reputation of our antecedent Regiments is carried forward into the 21st Century with support of the Welsh people.

As part of this day the Regiment would like to invite all members of the public from across Wales to attend, watch the parade and share this historic occasion under a shared common bond of national pride.

Regimental Secretary, The Royal Welsh, Lieutenant Colonel Chris Kilmister said: “The parade is a very significant day for all members of The Royal Welsh as we celebrate our Welsh identity based on 326 years of antecedent heritage.”

“The day includes entertainment from traditional welsh choirs, a full military parade and a formal lunch for members of the Regimental family and their guests.  This is a high profile event drawing attendance from across the world, and what better place to hold this than in the Millennium Stadium in the capital of Wales.”

Regimental Adjutant, The Royal Welsh, Captain Ben Phillips said: “This event will formally reaffirm our collective identity and our standing as one of the finest Welsh units in the British Army.  We all place immense pride in our Welsh identity across all ranks in the Regiment.  Representing the UK and Wales on the field of battle across the world is what we do, carrying our Regimental colours with us.  In June we will have the opportunity to represent our nation at the spiritual home of Welsh rugby.”

“The Millennium Stadium, the modern coliseum, at the heart of Wales is a fantastic venue for such a historic occasion.  Marching from the more traditional site of Cardiff Castle, through the streets of Cardiff into the Stadium really does represent the transition of the Regiment through its rich history and into its new, modern position at the forefront of Britain’s military forces.”

“As military parades go, this will almost certainly be one of the best examples of Welsh pride and support for military forces in Wales.  As a Regiment we would encourage as many members of the Welsh public to attend, it should be quite a show.”

Millennium Stadium Manager Mark Williams, a former Lieutenant Colonel in the Royal Regiment of Wales, added: “This is a landmark event in the history of The Royal Welsh and I am delighted that the Regiment will be celebrating with us at the Millennium Stadium.

“The Welsh Rugby Union has enjoyed close links with the Army in Wales and the Regiment has been involved in so many significant Welsh rugby occasions.

“It is a fitting tribute and huge privilege to welcome them back for the Presentation of New Colours and we look forward to working with the organisers for what will be a very special occasion next month.”

Tickets are only £5 and all profits will go to our Regimental charities, T? Hafan, The Army Benevolence Fund, The Royal British Legion and the Motivation Learning Trust, all of whom operate in Wales.

Alternatively tickets may be purchased in the WRU ticket office on Westgate Street just outside the stadium.