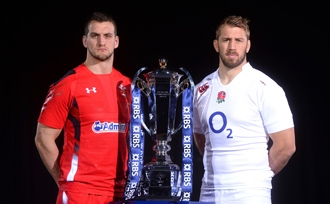 Planning is key ahead of Wales v England

The Welsh Rugby Union has urged rugby supporters to plan their travel in advance of the 2015 RBS 6 Nations opener between Wales and England at the Millennium Stadium.

The sell-out match kicks off at 8.05pm on Friday 6 February and is expected to attract over 70,000 fans, with thousands more flocking to the city-centre to enjoy the hospitality on offer in the bars and restaurants in Cardiff.

As the stadium’s events team set about their final preparations for another international spectacular, Millennium Stadium Manager Mark Williams is advising fans that they too should be preparing for the big day ahead.

“Wales versus England is as good as it gets in terms of a Six Nations opener and we’re expecting a capacity crowd at the Millennium Stadium. Our message to the fans is to plan travel arrangements as early as possible to ensure you get to and from the venue safely and in good time to avoid any disappointment on matchday.”

Scores of Millennium Stadium visitors will be used to attending Friday night rugby fixtures as well as midweek concerts and football matches at the venue which hosts its 105th Welsh rugby international when Wales take on the auld enemy. He added:

“Cardiff is a vibrant capital city and many of our visitors will be used to attending midweek and evening events. Nevertheless, as Stadium Manager, I tell my team not to be complacent when it comes to the challenges of any major event and I urge fans to remember that it’s always important to make sure that planning is not left until the last minute.

He added: “With thousands of fans heading for Cardiff transport links to the city will be busy! Those using public transport should schedule to arrive early for the trains and buses available or opt to use the coaches and the park and ride services around the city. Others may choose to make a weekend of it and spend some extra time in Cardiff to spread their travel over a couple of days.”

"We are delighted to announce eight additional trains will be provided to help Wales fans get to and return from Cardiff’s Millennium Stadium, but customers are warned to allow plenty of time to return to the station as a queuing system will be necessary to help passengers board trains safely. Those travelling from further afield are advised to check the time of the last service to ensure onward connections are not missed."

Arriva Trains Wales will provide over 13,000 additional seats compared to normal Friday evening services after the match however the Valleys and Cardiff, West Wales, Crewe, Cheltenham Spa, Newport and Ebbw Vale services are expected to be extremely busy.
ATW Customer Services Director Lynne Milligan said: “Due to the late 20:05 hrs kick off, the match will not finish until around 22:00hrs so we are urging supporters who want to return home on the train to make their way directly to Cardiff Central Station. It is tempting to head out to the pubs and bars straight after the match but we can only provide limited extra capacity and services at this time of the evening and we don’t want anyone to miss the last train home.”
For those travelling by road, Cardiff Council has released details of the park and ride facilities. Cars should follow the signage from junction 29 and 33 of the M4 while coach parking will be available at Sophia Gardens with access from junction 32. These open at 12noon and close at midnight. (Buses from 12.30pm with the last pick up at 11:30pm.)

Since the Millennium Stadium first opened in 1999, Wales’ national stadium has hosted an array of major events after dark including evening rugby matches in previous RBS 6 Nations championships and two World Cup tournaments.

Additionally, a long list of live music events at the Millennium Stadium have each attracted over 60,000 late-night revellers, with the likes of U2, Bruce Springsteen, the Rolling Stones, Oasis, Take That and Madonna all providing evening entertainment.

The summer of 2015 sees One Direction choose Cardiff over any other stadium for two special gigs ahead of their UK and Ireland tour on the evenings of Friday 5 and Saturday 6 June.

Details of all new events are released well in advance as the Millennium Stadium continues to attract the biggest crowds to the best events. The Stadium Manager added:

“The 2015 RBS 6 Nations fixtures and kick offs were released early last year with plenty of time for planning and preparation! For the seasoned rugby followers with their hands on the hottest ticket in town, arranging and coordinating travel and accommodation will have been the next priority. And for any first-time Millennium Stadium visitors, there’s still time make a travel plan and to ensure Wales v England is an unforgettable occasion for all the right reasons.”

The route to the front of the rail station, Station Approach in Central Square from its junction with Wood St, will be closed from THURSDAY 8am – SATURDAY 6pm with access for buses to the bus station being maintained outside of the full road closure times.

Arriva Trains Wales and First Great Western have confirmed there will be additional staff and British Transport Police at their stations and on board the trains.

The usual post-event queuing management system will be in place at Cardiff Central station and fans are being asked to wrap up warm as there may be up to an hour’s wait before being allowed into the station to board trains.

Ticket checks will be in operation before and after the game so passengers are advised to buy their tickets in advance to avoid ticket queues.