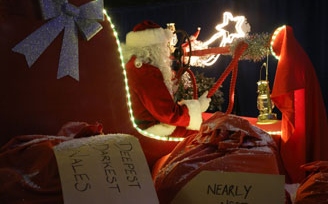 The Millennium Stadium has been given a magical Christmas makeover in time for Santa Claus Tours which come alive this week.

The annual festive revamp at the home of the Wales’ national squad has transformed the interior of the rugby stadium into a magical winter wonderland for all the family.

Cardiff’s popular tourist attraction has been adorned with Christmas trees and decorations inside a wonderful Santa’s grotto.

On selected dates from December 4 until Christmas Eve, Millennium Stadium visitors can meet with Santa Claus as he prepares his elves for Christmas day at the iconic rugby venue.

All Christmas callers will enjoy a festive treasure hunt through the Wales team dressing rooms and players’ tunnel to gather the clues to access the magical grotto where children will receive a special WRU gift from Santa himself.

The magical transformation has been completed just days after the venue attracted around a quarter of a million rugby supporters to watch their sporting heroes take on some of the world’s greatest rugby nations in the 2014 Dove Men Series.

“The Millennium is a stadium that never sleeps! And this month is no exception as hundreds of Christmas-lovers sign up for the festive behind-the-scenes tour at the national rugby stadium,” said Millennium Stadium Manager Mark Williams.

“As Santa’s helpers make the final touches to the winter wonderland deep in the heart of the home of Welsh rugby, it’s beginning to look a lot like Christmas in time for Santa Claus Tours!

“The transformation, just days after the nation celebrated Wales win over South Africa on the Millennium Stadium turf, is incredible and everyone here is excited to open the doors to the Christmas visitors.”

This season’s stadium tour with a Christmas twist last approximately 45minutes and can be booked for up to 30 persons via millenniumstadium.cymru but due to demand, places are limited.

For larger group sizes, please contact the Tours Administrator on 029 2082 2308 or email tours@millenniumstadium.com All children must be accompanied by an adult.