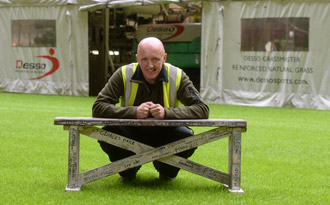 A Stitch-in Time at Millennium Stadium

The major pitch revamp at the Millennium Stadium has taken an exciting turn as two giant sewing machines have started work on the new turf at the home of Welsh rugby.

The Desso GrassMaster machines have begun stitching artificial fibre into the fresh shoots of grass to complete the new hybrid surface which will be revealed before Wales’ first Dove Men Series clash on November 8.

After a fortnight of ‘sowing’ grass seed at Cardiff’s iconic rugby venue, the ‘sewing’ of natural grass and its artificial counterpart is expected to be finished by the end of the week, one month before Wales take on Australia, Fiji, New Zealand and South Africa.

The specialist machines, encased within bespoke travelling tents, will stitch up to 21 million artificial turf fibres to the natural grass roots. The fibres equate to 86,400 kms of twine, more than twice the circumference of the earth!

The Millennium Stadium is among a host of major sports stadia to call in the Desso experts including Wembley Stadium, Twickenham, Aviva Stadium and the home of Real Madrid.

“This is a tried-and-tested system that features all over the sporting world,” said Head Groundsman Lee Evans who posed for photos on a wooden bench on which “Millennium Cardiff” has now been handwritten by the Desso workers alongside other major venues.

The Millennium Stadium’s radical turf transformation will vastly improve the playing surface in line with the most advanced hybrid surfaces in the industry, one year before Rugby World Cup 2015 brings eight games to Cardiff.

The major renovation project also includes new state-of-the-art broadcast facilities as well as a Terraplas pitch covering to protect the surface during non-pitch events such as rock concerts and motorsports.
Millennium Stadium Manager Mark Williams is enthusiastic about the progress so far. He said:

“We are now right at the heart of the pitch installation project as the giant Desso Grassmaster machines set about stitching the grass and artificial fibres which will make up the brand-new pitch.

“This stage marks a hugely significant moment at the Millennium Stadium which will ensure we continue to strengthen our reputation as one of the world’s leading multi-event venues for sport and entertainment for the future.”

Since its official opening in 1999, the Millennium Stadium has delivered over 350 major events for Wales and, with that, continued to improve facilities for the 770,000 paying visitors it attracts, on average, per year.

Mr Williams added: “We must continue to put the systems in place to ensure the very best environment for the national squad and the millions of spectators we welcome to Wales. This summer is no exception and we are excited and optimistic about our new pitch project, which is not only about providing a greater playing surface but also improved facilities for the media and a pitch covering system that will ensure we have the potential to deliver a wide range of events all year round.”