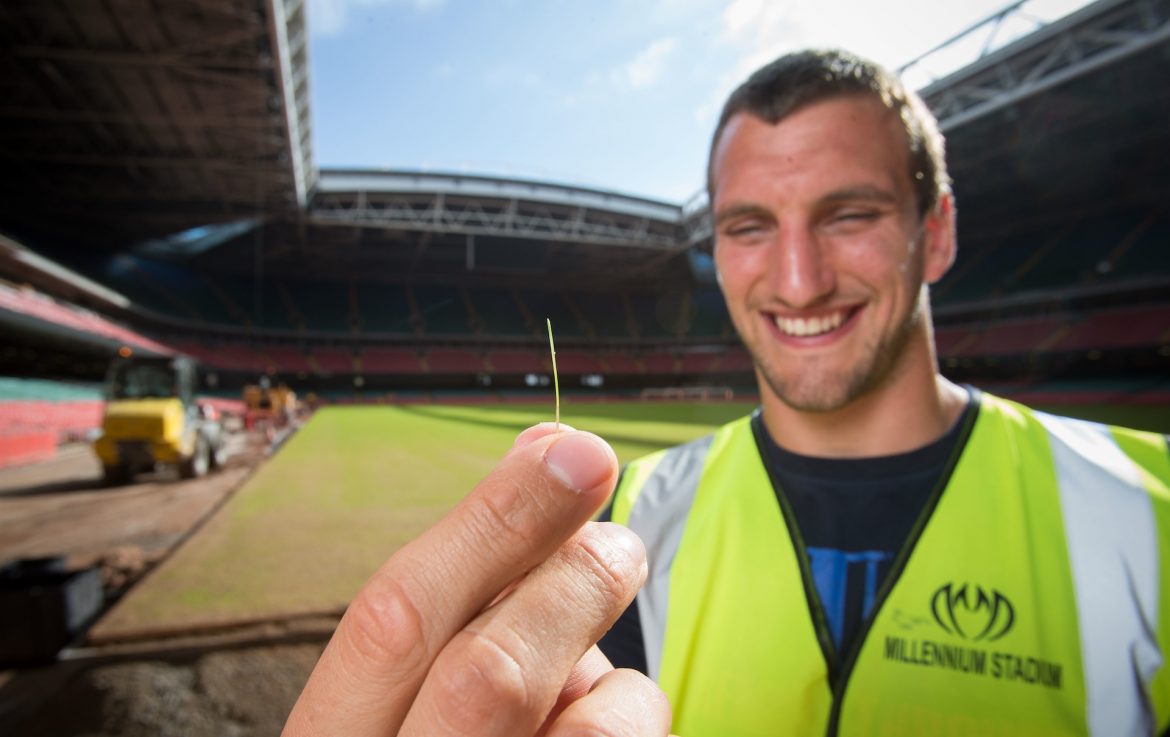 Sam pitches in at the Millennium Stadium

Wales star Sam Warburton visited the Millennium Stadium on Monday to see for himself the first green shoots of the new hybrid pitch at the iconic venue.

A major refurbishment project to install a DESSO pitch, which intertwines grass turf with millions of artificial fibres, has been underway at the home of Welsh rugby since 21 July.

The Wales and British and Irish Lions Captain was on hand to see the results of seven days growth since the first seeding took place last week.

The opening match of this autumn’s Dove Men Series against Australia will christen the pitch on November 8 and will be followed by matches against Fiji, New Zealand and South Africa on consecutive Saturdays.

“This is a new era for the Millennium Stadium,” said the Cardiff Blues Flanker. “And for me, as a player, the new Desso pitch is a really exciting project which will genuinely improve the quality of playing field for Welsh rugby internationals.

“I’ve always said there’s nowhere better to play rugby than at the Millennium Stadium in front of 74,500 roaring Welsh fans. The stadium is a very special place, but the old pitch system had come up against some harsh criticisms over the years and the WRU felt it was time for change.

“The players are extremely grateful to the WRU that this has been agreed and set in motion before this season’s Dove Men Series and Six Nations ahead of a challenging Rugby World Cup in 2015.”

Warburton added: “The National Squad management have a keen interest in the pitch project and have been involved throughout the consultation and planning stages. We’re all feeling really positive about the progress so far, I’ve had a great and informative afternoon with the stadium ground staff today and it’s been a fantastic to see the first green shoots.”

The first seeds were sown a week ago and now the DESSO experts will begin to stitch the artificial fibres over the coming weeks.

The new DESSO Grassmaster pitch system is set to be in place for the 2014 Dove Men Series, a full ten months before Rugby World Cup 2015 brings eight games, including two of Wales' pool games and two quarter finals, to Cardiff.

The greatest renovation project at the stadium since it opened in 1999 also includes the installation of the latest 'plug and play' technology for broadcasters and a Terraplas pitch covering system to protect the new Desso surface when the international stars of music and motorsports come to town.

The project will also open up a host of new and exciting opportunities for grassroots rugby in Wales as well as serving the must-visit, must-play venue’s exciting calendar of non-pitch events.

“The new pitch project is a massive undertaking that also includes new pitch-side facilities for broadcasters and a pitch covering system for other events like concerts,” said Millennium Stadium manager Mark Williams.

“The installation process is right on schedule, we have around three-quarters of an inch of grass growth above the soil, which means a similar amount of roots below.

“Sam’s had the opportunity to pick out an individual seedling and see for himself just exactly what stage the grass has reached.

“It’s fascinating to think that from such humble beginnings we are going to have a playing surface which should be the envy of the world game in just a few weeks.”

Tickets to watch Wales in action this autumn are available from your local rugby club or online at http://www.wru.co.uk/tickets.