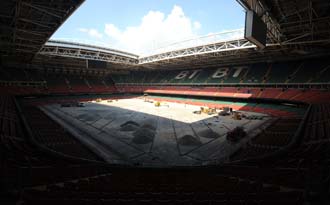 Millennium Stadium Manager Mark Williams has confirmed that the project to install a new Desso Grassmaster pitch is progressing well at the city-centre venue.

As the project enters into week two of the anticipated 15 week project, 50% of the drainage systems for the irrigation system and under pitch heating have already been installed.

The next step is to layer the surface with the tons of gravel, which is currently creating a mini mountain range on the other half of the stadium bowl, after it arrived by the lorry-load on Wednesday and Thursday last week.

"The Millennium Stadium project began in earnest last week and we have not been disappointed,” said Mr Williams. "The contractors arrived last Monday morning with a team of four, some spray paint, a measuring tape and a theodolite to mark out the new surface. This was duly done before all of the plant started to arrive on Tuesday and the diggers, earth movers, dumper trucks, rollers, diamond saws were all unloaded ready to start work.

"On Wednesday and Thursday, the drainage system was cut into the flooring and connected to the existing system while the lorry-loads of gravel started to arrive in anticipation for what is today's task of layering the irrigation pipes in preparation for the installation of the under-pitch heating system.

"We've already seen a huge amount of work carried out in the first seven days. This bodes well for the remainder of the project, which is a milestone endeavour in the Millennium Stadium's proud history of attracting major events to Cardiff.

He added: "This is a really exciting time for Welsh rugby and we are thrilled that, one week in, we're well on track to reveal our new pitch for the players, coaches, match officials and, of course, the fans that will make the home of Welsh rugby a very special place during the Autumn Internationals against Australia, Fiji, New Zealand and South Africa in November.”

The new surface is set to be in place for the 2014 Dove Men Series, with ten months then remaining before Rugby World Cup 2015 brings eight games, including two of Wales' pool games and two quarter finals, to Cardiff.

The renovation also includes the installation of the latest 'plug and play' technology for broadcasters at all sides of the pitch and a Terraplas cover to protect the new Desso surface.

The project opens up a host of new and exciting opportunities for grassroots rugby in Wales as well as serving the must-visit, must-play venue across a range of non-pitch events such as live music and motorsports.