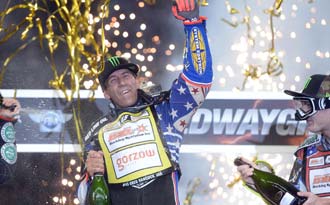 Greg Hancock ended his drought in the 2014 FIM Speedway Grand Prix by claiming the Mitas British SGP in stunning fashion under the closed roof of Cardiff’s Millennium Stadium.

Hancock added the gold medal to his 2004 and 2011 successes although he lost his World Championship lead to defending champ Woffinden, who is three points clear at the top on 90 going into the series’ month-long break for the Monster Energy FIM Speedway World Cup.

With five rounds remaining, defending champion Woffinden, picked up 18 points from the heats and the final, to Hancock's 14.

Hancock paid tribute to the raucous crowd who he said gave him the ‘energy’ to keep going.

"I've had three wins here now and every one of them has been insane. The noise and atmosphere here is unbelievable," he said. "It's hair-raising to hear that crowd go off.

“It was rad to be there and feel the buzz – it kept going all night. It was rad to see how loud they got on the last lap of Tai’s heats. The crowd just got louder and louder. It was speedway at its absolute best.”