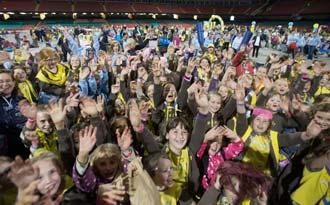 The Millennium Stadium hosted over a thousand young girls from across Wales at the weekend for an extra-special birthday party to mark the 100th birthday of Brownies.

As part of the Millennium Stadium’s Community Events initiative, 1,200 Welsh Brownies had the chance to take part in a special ‘girls-only’ adventure at the home of Welsh sport, as Girlguiding Wales staged its biggest sleepover ever to mark 100 years.

As well as a once-in-a-lifetime stadium sleepover, the stadium visitors enjoyed a disco with One Direction tribute band and a series of dance workshops.

Girlguiding Wales Chief Commissioner Felicity Ladbrooke also joined in with the party. She said: “This year is all about the Brownies, and how they want to celebrate their special year – it was brilliant to see the girls have so much fun at the biggest sleepover for Brownies in Wales. The girls loved the entertaining breakfast and especially the One Direction tribute band.  A huge thank you to the volunteer Leaders who made it possible for the girls to come – everyone had a fantastic time.”

The Millennium Stadium’s Community Events programme hosts up to 15 community organisations per year without the hire charge borne by commercial organisations.

Mark Williams, stadium manager at the venue which is owned and operated by the Welsh Rugby Union (WRU), said: “The WRU is delighted to host the Brownies for what has been another fun and memorable event as part of the Millennium Stadium’s Community Events programme.

“Just like the Brownies, the WRU has also celebrated a milestone occasion this week. On this same weekend fifteen years ago, the stadium opened its doors for its inaugural event and tens of thousands of rugby fans watched the Wales defeat South Africa for the first time in history.

“Over 350 events have now taken place at the multi-event venue across sport, music and entertainment. The Brownies’ special 100th birthday event is just another example of the versatility of the stadium.

“It is a pleasure to extend our hospitality to over one thousand local Brownies for their big sleepover occasion this weekend and we would encourage community organisations from all over Wales to get in touch with their events for next year.”

Further information can be found on the Millennium Stadium website: http://www.millenniumstadium.com/community