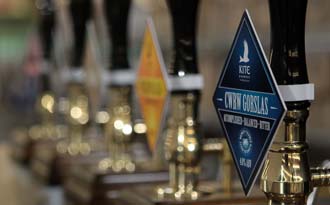 Final countdown to W-Ales Beer Festival is on

The ‘W-Ales Beer Festival’ is coming to the Millennium Stadium this week giving visitors a chance to taste the best beers, ciders and real ales from across the country.

The new three-day beer and cider festival will run from Thursday 5th until Saturday 7th June in association with CAMRA, organisers of The Great Welsh Beer and Cider Festival, and well-known brewers Heineken, Brains and Evan-Evans.

Hosted inside Europe's largest indoor arena, the festival is set to be the largest of its kind in Wales with more than 270 different ales from 70 different Welsh breweries.

The inaugural event aims to attract ale connoisseurs as well as newcomers looking to experience the varying new and traditional brewery offerings.

Open over three days, strictly to over 18s only; festival-goers will enjoy a great day out in the capital city with product sampling, top tips and demonstrations from the top brewers.

Visitors can also get involved in a range of traditional pub games such as skittles and tombola, with the chance to win some fantastic prizes.

From the main stage, an eclectic mix of music will play out from local cover bands 'The Delta Breaks' and 'Trigger's Broom', the alternative piano-led 'Fingertrap Band',  classic rockers 'Fireroad' and 'Cardiff University Jazz Society'.

There will also be a foodie fix to soak up the alcohol, with a festival-favourite hog roast, traditional fish and chips and a sweet selection of chocolates and truffles.

Tickets for W-Ales Beer Festival are £25 (3 Day Pass) and £10 (Day Pass) and are available now to over18s at wru.co.uk/tickets. There is also a special 'buy 3 get 1 free' deal available for day passes only.

Tickets will also be available from the ticket booth on Gate 6 which will open one hour before the event opens to the public on Thursday at 5pm and on Friday and Saturday at 12noon.

The Millennium Stadium's inaugural beer festival will be added to a list of over 350 major events at the iconic venue, including rock concerts, Speedway, Olympic football, Rugby World Cup matches as well as 100 Welsh rugby internationals.

With its fully-retractable roof and city-centre location, organisers believe this year's revamped Great Welsh Beer Festival will be better than ever.

"The Welsh beer festival has the potential to be bigger and better than ever at its new home, the Millennium Stadium, where we're well-versed at delivering world-class events,” said Stadium Manager Mark Williams.

"In its new guise, as W-Ales Beer Festival, we're working with some fantastic breweries in Brains, Heineken and Evan-Evans to make sure the beers, ales and ciders available are top class.

"We've also engaged our catalogue of event contacts to broaden the appeal of this year's event and create a great day out where visitors can enjoy drinking sensibly and responsibly in a safe environment.”

Duncan Ward, Great Welsh Beer Festival Organiser, paid tribute to the brewers of Wales that will be on show at the multi-event venue. He said:

"There has been a huge growth in the number of Welsh breweries in the last couple of years which means our national Great Welsh Beer Festival really is better than ever.”