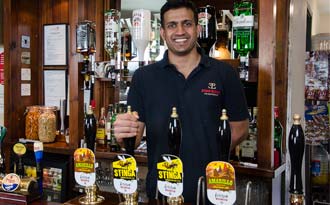 International award-winning brewer Evan-Evans is brewing to capacity in preparation for the ‘W-Ales’ Beer Festival to be held at the Millennium Stadium, Cardiff, from June 5-7.

Simon Buckley, chief executive of Evan-Evans, said: “The ‘W-Ales’ Beer Festival is a new event being held at the Millennium Stadium, which will showcase a selection of beers from across Wales.

“At the moment we have never seen such a demand for our beers – from within our own pub estate and also from the wider cask ale market across the UK.

“At the ‘W-Ales’ Beer Festival we will be launching a series of new beers from our Artisan beer range, as well as launching the beers brewed by our new London Brewery, the Porter Street Brewery.

“This event is a major opportunity for us as the leading Welsh specialist cask ale brewer to showcase all our beers and to show, for the first time, these unique additions to our brand portfolio.

“These are fantastic new beers that have been formulated to satisfy the demand from an increasing number of discerning consumers.”

James Buckley the Evan-Evans team brewer responsible for the new beer brands, said: “We have been working on these new beer brands for the last six months and the new craft beer range has received rave reviews.

“Unlike many of the craft beers being touted in the marketplace, these are brewed using only the finest raw materials.

“We simply do not use sugars like some of the larger brewers. This range of beers has been well received throughout the UK, and I am sure the next two will do just as well.

“The London beers are really exciting and we have already pre-sold most of the production into two ‘National Pubcos’.

“At the moment we are flat out at our brewery in Llandeilo, West Wales, and there is little doubt that we are going to need yet more fermenting vessels to be able to cope.”

The company has recently started a recruiting campaign for new employees for the brewery and a proposed bottling and packaging facility.

The three-day ‘W-ales’ festival is a joint venture between the Millennium Stadium and CAMRA, organisers of The Great Welsh Beer and Cider Festival.
Hosted inside Europe's largest indoor arena, the event will see around 270 different real ales being poured from 70 different Welsh breweries.
The festival will showcase all the best Welsh beers as well as the award-winning real ales, ciders and perries from across the whole of the UK.
Over three days visitors can enjoy product sampling, top tips and demonstrations from the top brewers.
Tickets are £25 (3 Day Pass) and £10 (Day Pass) and are available strictly to over18s now at wru.co.uk/tickets.