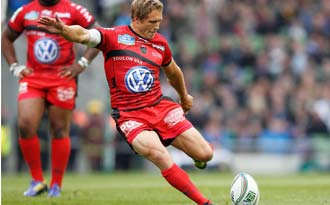 With the countdown already underway to the biggest occasion in European club rugby, reigning champions, RC Toulon, have ‘taken the spoils’ ahead of the 2014 Heineken Cup final by winning a toss to decide which playing kit will be worn at the Millennium Stadium on Saturday, 24 May.

Toulon will be in their all-red strip as they attempt to emulate Leicester Tigers (2001 and 2002) and Leinster Rugby (2011 and 2012) and become the third club to win the title in successive seasons, while first-time finalists, Saracens, will wear their away kit of wolf grey with blue strips.

Saracens chose the home changing room at the Millennium Stadium and that could be a portent of things to come in just over three weeks time as Leinster occupied that same changing room when they staged a sensational second-half comeback to defeat Northampton Saints in the 2011 decider.

This will be the fifth Heineken Cup final played at the 74,500 capacity Millennium Stadium and to date, no French club has emerged victorious from the venue with Biarritz Olympique and Toulouse losing out to Munster Rugby in 2006 and 2008.

With Saracens bidding to become the first English club since London Wasps in 2007 to lift the trophy, tickets for the Cardiff final are selling fast.

Meanwhile, ERC can confirm that up to 400 additional seats will be made available for the Amlin Challenge Cup final between Bath Rugby and Northampton Saints at the Cardiff Arms Park on Friday, 23 May.