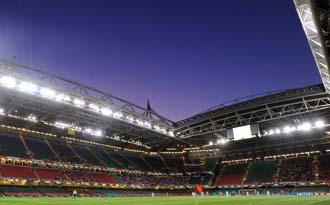 The Football Association of Wales [FAW] has confirmed that it has submitted a bid for Cardiff to be chosen as one of the 13 host cities for the 2020 European Football Championships ("EURO 2020").

Cardiff’s 74,154 capacity Millennium Stadium – an award winning UEFA category 5 stadium – is at the heart of the FAW’s bid to secure a package of matches consisting of three group games plus either a last 16 or a quarter final match. The FAW’s bid has the full support of a host of key stakeholders including the Welsh Government, Cardiff Council, the Millennium Stadium, Cardiff & Bristol Airports, and the key rail and bus operators.

Jonathan Ford, Chief Executive of the FAW said: “The FAW is thrilled to submit its UEFA EURO 2020 bid and we believe that we have a strong and compelling proposition. The Millennium Stadium, with a capacity of almost 75,000 as well as 100 hospitality boxes, would generate a significant financial contribution for UEFA.

“In terms of transport, our bid is supported by both Cardiff and Bristol airports who have signed service level agreements outlining their delivery of UEFA’s EURO 2020 tournament requirements. Both airports are able to operate 24 hours a day and are easily accessible from Cardiff city centre. By 2020, rail links to London will be down to just 90 minutes and when you also consider Birmingham, the FAW is able to offer four international airports within two hours of Cardiff, thus providing UEFA and all UEFA EURO 2020 spectators with multiple airport options to choose from.

“All UEFA EURO 2020 ticket holders will also benefit from free travel on buses and trains including the transport connections linking Cardiff city centre with both Cardiff and Bristol airports. We have a strong accommodation plan with the majority of UEFA’s own accommodation requirements located within walking distance of the Millennium Stadium. Through working with our numerous accommodation partners, the FAW is also able to offer UEFA EURO 2020 spectators with a choice of 41,000 beds, all located within an hour of Cardiff and in locations covered by the FAW’s free travel offer.”

“I have been fortunate to play in some of the world’s greatest stadia but nothing matches the atmosphere and passion generated by the Millennium Stadium. These are exciting times for Welsh football and I’m really proud to offer my full support to the FAW’s UEFA EURO 2020 bid.”

First Minister of Wales, Carwyn Jones said: “I am delighted to support the FAW’s bid to stage the UEFA EURO 2020 Championships. Wales has a proven track record in delivering, for event owners and to the world, successful, high profile sporting events. Organisers of the Rugby World Cup, the Ashes test match, the Ryder Cup and Olympic football fixtures have all found us to be a responsive and welcoming host nation of the highest calibre.

“Anyone who has experienced Cardiff, in particular, on a match or event day will know how our great capital city comes alive as a fan-friendly and exciting visitor zone. By working together, Team Wales can help deliver a safe, secure and truly exceptional event.

Roger Lewis, Group Chief Executive of Welsh Rugby Union said: “The Millennium Stadium would be honoured to welcome the UEFA EURO 2020 Championships to Wales. To ensure we provide UEFA with a venue worthy of such a great event we are investing significantly in the Stadium and the surrounding area, with the assistance of the Welsh Government and Cardiff City Council.

“We will install a new DESSO pitch this summer which together with our unrivalled fully-retractable roofing system will guarantee the best possible playing surface. Add to this our significant seating and hospitality capacity, the unique city centre location and that we will have the very latest plug and play broadcast technology and I believe the Millennium Stadium provides UEFA with the perfect venue for EURO 2020."