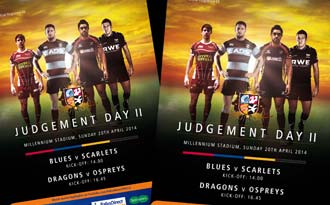 The greatest regional rugby event of the season is coming to the Millennium Stadium tomorrow and fans can still get tickets to see their favourite Welsh rugby stars in action under one roof.

Judgement Day II, the double-derby extravaganza on Easter Sunday, will see Cardiff Blues take on Scarlets at 2pm and Newport Gwent Dragons will face the Ospreys at 4.45pm.

Tickets to watch the back-to-back rugby games are available all Easter weekend; at the WRU Shop until 6pm today and all day tomorrow from three locations just outside the stadium –  the WRU Shop, Cardiff Blues Ticket shop and Ticketline, all on Westgate Street, Cardiff.

The unique event, in conjunction with RaboDirect PRO12, is the second of a four year deal which sees the Blues and the Dragons play their 'home' fixtures against alternating regional rivals on the same day at the iconic stadium.

As well as an exciting festival of regional rugby, there will also be a feast of entertainment with former X Factor stars Rhydian Roberts and Lucie Jones and up-and-coming singer-songwriter Tim Cronin all signed up to perform at the event.

Lucie, an avid Blues fan from Cardiff, is delighted to have her VIP ticket already sorted for the event. She said: "I am such a huge rugby union fan.  Judgement day is such an amazing event and I cannot wait to be a part of it this year at the Millennium Stadium! Go Blues!"

Tim Cronin will also be playing throughout the day. Combining his love of music and rugby, the former Glamorgan Wanderers and Neath RFC player will be treating fans to his up-coming EP, 'Rise Forever' which features a track called 'Remember Me' inspired by his rugby playing days.

On playing at the stadium tomorrow, he said: “I can remember my father taking me to the millennium to watch Wales take on New Zealand and I can recall being inspired by the electric atmosphere in the ground. To be performing at such a prestigious event at an incredible venue like this is a true honour.”

Due to the many thousands of fans travelling to the event tomorrow, those looking to buy their tickets on the day should be aware of the road closure on Westgate Street from 12noon.