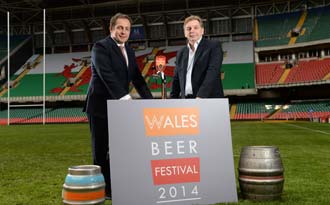 The Millennium Stadium will host the biggest beer festival in Wales when the inaugural ‘W-Ales Beer Festival’ comes to the iconic city-centre venue this summer (5-7 June).

The new three-day beer and cider festival is coming to town in just over one month in partnership with CAMRA, organisers of The Great Welsh Beer and Cider Festival.

The festival is set to be the largest of its kind in Wales, showcasing all the best Welsh beers as well as the award-winning real ales, ciders and perries from across the whole of the UK.

From seasoned ale drinkers to those wanting a great day out in the capital city, festival-goers will enjoy the wide range of hospitality and entertainment on offer.

Over three days visitors can enjoy product sampling, top tips and demonstrations from the top brewers.

As another action-packed rugby season nears its end with Judgement Day (20 April), Swalec Finals Day (May 4) and Heineken Cup Final (May 24) at the home of Welsh sport, Stadium Manager Mark Williams is expecting W-Ales Beer Festival to become a firm fixture in the calendar – an annual 'end of season party' at the Millennium Stadium.

"Many a pint has been shared at the Millennium Stadium over the past 15 years but this is the first time we've held a beer festival at the venue and it's fantastic to work with Wales' top ale producers to make this happen over three days in June.”

The stadium, with its fully-retractable roof and removable pitch, has a proud reputation for bringing major events to Wales.

The WRU, which owns and operates the stadium, contributes a £130m boost to the local economy each year and sustains 2,500 full time jobs, according to a recent independent study.

The stadium manager added: "The stadium has a great reputation for hosting a wide range of major events and there's no better backdrop in Cardiff for such a huge festival occasion.

"As an icon of modern Wales the venue also operates in a green and sustainable manner befitting its stature and it is a great pleasure to engage with the quality and selection of local partners involved in W-Ales Beer Festival 2014.”

Duncan Ward, Great Welsh Beer Festival Organiser, also paid tribute to the brewers of Wales and the huge growth in Welsh brewing in recent years which has enabled such an event.

"There has been a huge growth in the number of Welsh breweries in the last couple of years which means our national Great Welsh Beer and Cider Festival really is better than ever. According to CAMRA's Good Beer Guide 2014 eleven new breweries opened in just 12 months in Wales, which means that this year we will have a record seventy welsh brewers at the festival, plus ciders and perries from the best producers in the whole of the UK.”

Springfield's in Monmouthshire produce 'Wobbly Munk' the cider which won the overall Gold in CAMRA's National Cider and Perry competition, with another welsh cider, C.J's Surprise from Gwent taking the Silver. Wales' beers are doing well too, with three beers from the Tiny Rebel brewery going forward into the Champion Beer of Britain Competition held at the Great British Beer festival in August.