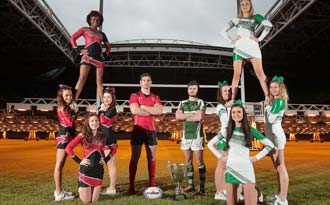 Some of Welsh rugby’s brightest young stars are set to be on show at the home of Welsh sport when Cardiff University tackle Swansea University in the 2014 Welsh Varsity this evening at the Millennium Stadium. (KO 7.30pm)

The annual rugby showdown between Cardiff and Swansea's university teams has attracted a record 50,000 crowd since the event first relocated to Cardiff's iconic rugby venue in 2011.
And this year's grudge match promises to be the most exciting yet as reigning champions Swansea, bolstered Wales Sevens star Will Thomas, go for a third consecutive victory over their Cardiff rivals.

He is expecting this season's Millennium Stadium extravaganza to attract more welsh rugby fans as well as the students and alumni that flock to the event year on year.

"The Varsity match between Wales' two great rugby institutions has developed into a must-see occasion which now attracts close to 20,000 spectators. It's one for all rugby lovers, not only because of the carnival atmosphere, but also because of the style and manner in which the game is played."