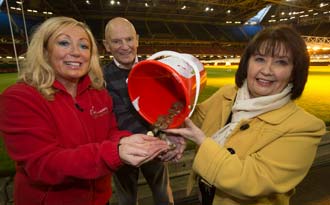 The Welsh Rugby Union has thanked Welsh rugby supporters for their generosity as bucket collections at the Millennium Stadium have raised more than half a million pounds for charitable causes.

Since the iconic rugby venue first opened in 1999, charity collections at the home of Welsh sport have raised upward of £529,000 across 102 Welsh rugby matches.

The WRU bucket collection gives support to charitable endeavours across local and national remits and have raised money for charities such as Ty Hafan and Valleys Kids as well as British Heart Foundation and Diabetes UK.

Millions of fans who have arrived at the stadium for international encounters are familiar with the volunteers who invite them to throw coins into collection buckets.

The WRU approves the collections and allows the volunteers to collect for good causes near the entrance gates to the famous ground.

The Union has also stepped in to support international appeals like the recent Philippines crisis when over £9,000 was raised to support the overseas typhoon victims in a bucket collection before Wales defeated Argentina 40-6 in the 2013 Dove Men Series.

"The Welsh rugby public have shown huge generosity for the bucket collections at Wales' home internationals,” said WRU Charity Officer Julie Thomas. "Their charitable giving has always been consistent, even in the current climate, and we're extremely grateful to the fans for continuing to fill the buckets of the excellent volunteers who also deserve credit for the time they devote to charity.”

Outside of international rugby events, an additional 15 community organisations are invited by the WRU to bring their own fundraising events to the Millennium Stadium free of charge.

Charitable work also continues throughout all aspects of the game in Wales. Already this season, Warren Gatland's squad have helped raise awareness for the anti-domestic violence 'Not in my Name' campaign and anti-racism in sport project 'Kick it Out'.

The WRU also helps charities with their promotional activity with international players often endorsing their work through poster campaigns.

At grassroots level, the WRU has recently supported the campaigns of St John Wales and Welsh Hearts which will also ensure the sustainability of Welsh rugby clubs by equipping club volunteers with life-saving first aid skills and equipment.

Welsh Hearts will also be the recipients of the bucket collection at tomorrow's Wales v Italy game in the RBS 6 Nations opener (kick off 2.30pm).

WRU President Dennis Gethin is Chairman of the WRCT, the longest-standing beneficiary of the stadium's bucket collection since 1999. He commented:

"The Welsh Rugby Charitable Trust is always grateful to be awarded the opportunity to have a bucket collection at home matches because the proceeds obtained from such collections play an important part in enhancing the quality of life of those players who have been severely injured whilst playing the game they love.

"On behalf of the Welsh Rugby Charitable Trust I thank the WRU for the opportunity that they have offered to the Trust at these various collections.”

The WRU welcomes applications from all charities however the calendar for 2014 games has already been filled. The application process for 2015 will launch this summer via the WRU website.