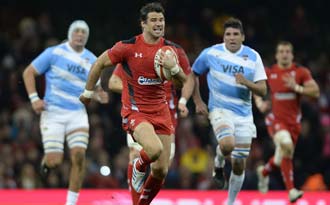 The Welsh Rugby Union has issued a thank you to rugby fans after over nine thousand pounds was raised at the Millennium Stadium to support victims of the recent Philippines typhoon.

The Union dedicated a bucket collection to the Disaster Emergency Committee (DEC) Cymru Philippines Crisis Appeal when Wales played Argentina in the second of four Dove Men Series games at the home of Welsh sport.

Over 46,000 watched as Wales ran in four tries to beat Argentina 40-6 on home soil and, before the game had even kicked off, thousands of fans dug deep to show their support for the DEC.

Roger Lewis, WRU Group Chief Executive, said: “The generosity shown by rugby fans in support of the Philippines disaster collection has been outstanding and, on behalf of the WRU, I extend a massive thank you to all those who contributed to the collection which totals in excess of nine thousand pounds.”

Praising the response, Chair of DEC Cymru, Julian Rosser said: “The support of the Welsh public over the last two weeks has been astounding.  Thank you all so much, such generosity is enabling our member agencies to respond quickly and effectively with immediate aid in some of the worst hit areas, supplying food, water and medical care, and also to begin planning their recovery efforts over the next few months. ”

The monies raised will be donated to help those affected by the typhoon by providing essential water, food and shelter at this crucial time.

For the fans who watched the game at home and anyone wanting to give further, donations can still be made at www.dec.org.uk or by calling 0370 60 60 900.