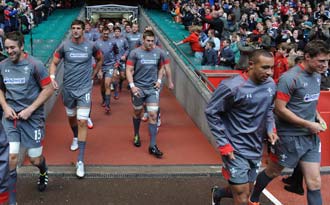 Wales captain Sam Warburton has thanked the thousands of Welsh rugby fans who flocked to the Millennium Stadium on Tuesday to watch the national squad’s first training session ahead of the Dove Men Series.

Almost ten thousand supporters turned out to support the Wales team for the free-to-enter open training session at the same iconic venue that will host Wales’ Autumn Series which kicks off against South Africa on Saturday 9th November.

“It’s great to be back together again as a squad and so good to be joined by almost ten thousand fans at the stadium before the Dove Men Series has kicked off!” said Warburton.

“The next few weeks will be challenging, particularly with South Africa up first, and to have the support of so many fans going into the campaign will be a massive boost for the players. We’re extremely grateful to everyone who’s turned up today and I hope they’ve enjoyed it too!”

The 9,812 strong crowd cheered as ‘Watch Wales for Free’ compere and rugby legend Scott Quinnell called Wales onto the hallowed turf to begin preparations in earnest before the Springboks come to town in just under two weeks.

As well as 35 of Wales’ finest rugby players, Quinnell also introduced another extra special member of the WRU family – Scorch, the newly unveiled digital mascot who has already starred on television screens as part of a marketing campaign for the fixtures against Springboks, Argentina, Tonga and Australia.

Scorch was unveiled to fans on the big screens in the form of a series of short films which will signal significant moments in a game – such as try and point scoring, substitutions and refereeing decisions.

And in a last-minute twist for fans exclusively in the Stadium, the former Wales and Lions legend launched a special ‘Draw Scorch’ competition for children – to rival the efforts of Toby Faletau, Alun Wyn Jones and Richard Hibbard also displayed on the big screens.

The session was a fantastic occasion ahead of the Dove Men Series against the Springboks, Pumas (Saturday 16th), Tonga – marketed with ‘family friendly’ prices – (Friday 22nd) and the Wallabies (Saturday 30th) on consecutive weekends in November.

Tickets are selling well for the four match series and are still available, starting at £25 (£10 concession) online at www.wru.co.uk/tickets. More details as follows: