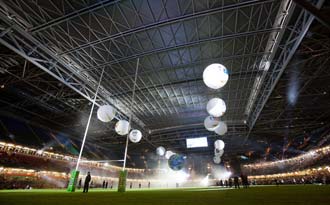 The Rugby League World Cup was launched in spectacular fashion at the opening ceremony in the Millennium Stadium yesterday.

A 1,500-strong dance display wowed a record Cardiff crowd with a dazzling performance where former rugby stars Martin Offiah and Gareth Thomas having starring roles with the latter bursting through the spotlight to score at his former stomping ground.

Harpist Catrin Finch and classical-pop quartet Escala were also involved in the extravaganza under the closed roof of the Millennium Stadium.

After the ceremony Australia beat England 28-20 in the opening match, followed by Italy’s 32-16 victory over Wales in front of a 45,052 fans.

It was a record opening day crowd for the event, beating the 41,271 who saw England beat Australia at Wembley in 1995.