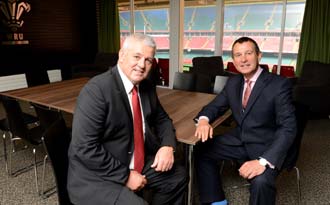 The iconic sporting venue, which is owned and operated by the WRU, underwent a recent £3m refurbishment, including an impressive re-design of the hospitality facilities.

The biggest investment in the hospitality facilities since the stadium first opened in 1999, aims to improve the sport and entertainment experience for corporate hospitality clients.

Completed in time for this autumn's Dove Men Series, which kicks off when Wales host South Africa on Saturday 9 November, VIP guests can watch all the best international rugby action from the comfort of the stadium's first-ever pitch-facing lounge or choose from 112 designer suites and five lounges, catering for between 12 and 200 people.

As well as first-rate facilities inside the venue, visitors at the home of Welsh rugby will be treated to an enhanced customer journey with the introduction of a bespoke VIP entrance accessible only for hospitality patrons/clients.

The new investment has also heralded the arrival of the official WRU Business Club, a network for linking Welsh rugby's corporate stakeholders such as delegates from Hugh James, Barclays, Under Armour and Principality Building Society.

Over 70 targeted business people attended the exclusive event which was held on the same day the WRU published its Annual Report to reveal a record £22.1m investment into Welsh Rugby.

Mr Lewis explained how the revamp will provide greater flexibility to entertain VIP guests at Wales' upcoming autumn encounters as well as appealing to a range of new clients looking to host their conferences and events in Cardiff all year round.

"The Millennium Stadium sets the benchmark in terms of the on-pitch experience and the refurbishment ensures a fantastic off field experience to match,” He said.

"The stadium has witnessed an extraordinary past twelve months, it has attracted virtually every major artist who has toured the UK and witnessed the success of Welsh rugby.  It has become a must-visit stadium.

"We have made a significant investment in the Stadium and the facilities, something that hasn't been done since the Stadium opened in 1999 and it will raise the bar of our hospitality offerings.”

Head Coach Warren Gatland added: "In Wales we are proud to have some of the best rugby facilities in the world.

"There is nothing to match being part of the atmosphere here with the roof closed and the crowd singing.  For a squad it's great to be part of.”

The overhaul makes possible a range of exclusive hospitality packages for the Dove Men Series starting from £199 plus VAT per person via the official Millennium Stadium website.

To guarantee access to all Wales' homes international matches, the WRU also offers a range of long-term licences with the added benefit of a dedicated client manager to deliver an unforgettable hospitality experience and the full-advantage of Business Club offers and incentives.