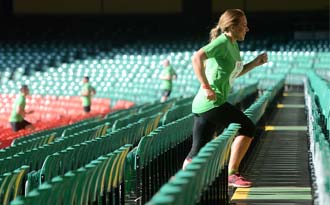 Thousands of sports enthusiasts will race to the Millennium Stadium this weekend for the Men’s Health magazine ‘Survival of the Fittest’ event in Cardiff.

The home of Welsh sport will host up to 3,000 sporty men and women as they take on a 10k running challenge interspersed with tough obstacles through the city on Sunday 29 September.

Wales’ capital city is the host location for the first event of this year’s Survival Series which also heads to cities in Scotland and England.

The event comes back to the Stadium for the fourth consecutive year and is considered a highlight of the Cardiff run, due to its significant size and stature.

While new and previous Survivors will be looking forward to reaching the final hurdle of the mighty Men’s Health Wall of Fame, runners should be prepared to experience a distinct ‘runner’s high’ at the 74,500 capacity venue.

A spokesperson representing the event commented: "People think our Cardiff course is pretty flat. Until they get up close and personal with the Millennium Stadium stair climb!

"This is definitely a race with a difference and a great way to see the Welsh capital together with a bit of rough n' tumble along the way."