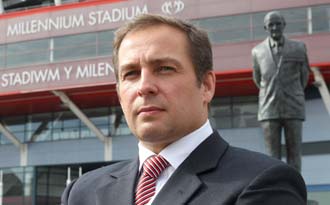 A Lieutenant Colonel in The Royal Welsh has been appointed as the new Millennium Stadium Manager for the Welsh Rugby Union.

Mark Williams, originally from Glynneath, South Wales, has 20 years’ experience as an army officer and has served on multiple tours of duty in Northern Ireland, Bosnia, Kosovo and Iraq.

He was decorated for his actions in combat in Iraq where, as a Company Commander, he led 135 Welsh soldiers on countless dangerous missions into Basra during the height of the fighting in 2007.

On his retirement from the Army, Lt Col Williams, 42, joins the WRU later this month and in tandem with his management role will immediately take his place as a member of the WRU’s Executive Board.

His appointment completes the WRU Executive team as the announcement comes just a week after Josh Lewsey was recruited to the Board as WRU Head of Rugby. All Executive Board members and Head Coach Warren Gatland report directly to the WRU Group Chief Executive Roger Lewis.

In his new role Mark Williams will have full management responsibility for the operation of the Millennium Stadium which is wholly owned and operated by the Welsh Rugby Union.

The Group Chief Executive of the Welsh Rugby Union, Roger Lewis, said: “I am delighted to welcome Mark Williams to the organisation in this crucial role at such an exciting time.

“We will soon be welcoming the Rugby League World Cup to Cardiff and then our Dove Men Autumn Series kicks off with games against South Africa, Argentina, Tonga and Australia.

“I am confident that Mark has the leadership and management skills to grasp these opportunities to continue to build on the fantastic reputation as an international events venue the stadium now enjoys.

“His military background speaks of precision, determination and clear strategic thinking which will all set him in good stead for the stadium manager role.

“He will be managing a strong and experienced team and I know he has the vision and ambition to get the best out of a great group of people.

“The stadium is a symbol of Wales and Mark is fully aware of the responsibility which is inherent in the role he is about to take on.”

Mark Williams said: “I am deeply honoured to be joining the WRU in such an important role and I relish the challenges and opportunities this represents for me.

“As a proud Welshman and rugby supporter I understand the important place the stadium holds in the whole psyche and culture of Wales.

“It enjoys a great reputation for delivering excellence and I will be working hard to sustain and build on that in the months and years ahead.

“The WRU has already established a superb international rugby sporting calendar for several years ahead and I know the interest in the stadium as a major venue for music and important events is intense.

“We have to maintain high standards and adapt where necessary to make sure that everyone who uses the stadium enjoys a unique and rewarding experience.

“I know my military and leadership experience will serve me well and I look forward to working with a great team at the WRU.

”This is the right time in my career to be making a move of this sort and I am grateful to the WRU for giving me this fantastic opportunity.”

The Chairman of the WRU, David Pickering, who also chairs the Millennium Stadium plc Board, said: “This is a great appointment for the WRU and I know Mark already has strong and relevant relationships with the relevant local authorities, the emergency services and with the Welsh Government.

“He will be able to hit the ground running and will be able to utilise his professional experience to make sure standards are maintained and opportunities are grasped. We are delighted to have secured such a high calibre individual to fulfil the crucially important role.”

Mark Williams is currently a Lieutenant Colonel working with MOD procurement based in Bristol.  During his career he has held some very high profile military appointments in both the training and operational environments including time as a Battalion Adjutant, Company Commander and Battle Group Chief of Staff with 2nd Battalion The Royal Welsh.  He was also the Deputy Chief of Staff in 160(Wales) Brigade, based in Brecon, where he helped organise joint UK operations and planning exercises with the Welsh Government, Police and Fire Services.