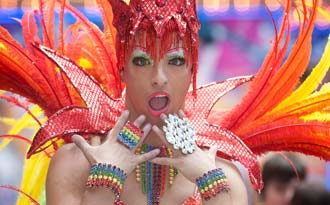 The Millennium Stadium was awash with colour when thousands of revellers turned out for Cardiff-Wales LGBT Mardi Gras on Saturday 31 August.

The biggest celebration of lesbian, gay, bisexual and transgender communities in Wales was held at the national home of sport for the very first time, following a successful 13 years at the neighbouring Cooper’s Field.

Known for its carnival atmosphere and fusion of entertainment and music, the festival of Equality and Diversity was held as part of the Welsh Rugby Union’s commitment to hosting 15 community events every year.

The Community Events initiative is open to charitable and community organisations all over Wales.  Application forms for the 2014 initiative can be found under the Community section of the Millennium Stadium website. The next process will be open in October until December 2013.