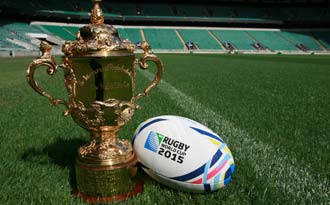 With two years to go until the Rugby World Cup 2015 brings eight games to Cardiff, Gilbert Rugby has launched the design of the official match ball that will play its part in every pass, kick and try at the home of Welsh sport.

With the 2011 design proving a hit for fans and retailers around the world, the striking and innovative England 2015 ball artwork has been designed with performance and players in mind, while taking inspiration from the Modern Classic tournament look and feel that will be synonymous with the world’s third-largest sports event.

Player consultation has been central to the design details that will enhance the showcasing of skills. Special emphasis has been given to ensuring that contrasting colours appear on the ends of the ball to enhance visibility for passing. Bold colours along the seams provide kickers with strong visual references. The result is a unique and special ball with strong visual impact.

A world leader in match ball innovation and development in international Rugby for more than a century, the UK-based firm will supply the match, training and replica balls for Rugby’s global showcase event. Attention now turns to the technical development of the Rugby World Cup 2015 official match ball.

As with previous Rugby World Cups, the new ball will be in use for over a year prior to England 2015, in both domestic and international Rugby – in both hemispheres. This will ensure that almost every professional player in the world will be familiar with the ball well before RWC 2015 kicks off.”

Over eight RWC2015 games in Cardiff, Wales will play two pool matches at the Millennium Stadium which is the only venue outside England scheduled to host the Rugby World Cup 2015 tournament.

JOIN THE FRONT ROW
For all the latest Rugby World Cup 2015 news and information, including details on tickets and volunteering, join The Front Row – and receive the official tournament newsletter.
Sign up at www.rugbyworldcup.com/frontrow