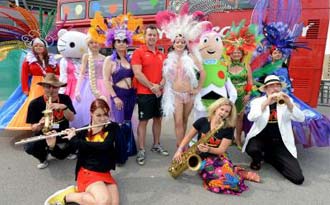 Wales’ most capped referee has put his weight behind the festival of Equality and Diversity which will take over the iconic stadium as part of the Welsh Rugby Union’s commitment to hosting 15 community events every year.

The biggest celebration of lesbian, gay, bisexual and transgender communities in Wales comes to the national home of sport for the very first time this weekend, following a successful 13 years at the neighbouring Cooper’s Field.

The lively festival is known for its carnival atmosphere and is expected to attract upward of 18,000 fans, regardless of gender or sexual orientation, for a full-day of with live music, funfair rides, a cabaret garden as well as a designated family zone during the afternoon.

For the inaugural event backed by the WRU, the Millennium Stadium celebration will include a rugby skills area aimed at engaging the LGBT community in sport.

There will also be the chance to rub shoulders with Owens, who has campaigned to stamp out sexual discrimination in sport since opening up about his sexuality in 2007.

“The Welsh Rugby Union promotes equality on and off the rugby pitch across all rugby communities and it is with pleasure and pride that I stand up with Cardiff-Wales LGBT Mardi Gras campaigners today to show my support for LGBT communities,” he said.

“Sport does not and should not discriminate if we are to continue to produce such fine and successful talent in Wales and it is important that the WRU and Welsh rugby role models work together to get everyone involved in rugby, no matter what their gender or sexual orientation.”

No stranger to the Mardi Gras event and, of course, the Millennium Stadium where he refereed the 2008 Heineken Cup Final, Nigel added:

“The Mardi Gras is a fantastic event, full of colour and pizzazz, and it has never failed to impress me as a great day out in Cardiff. This year’s event at the Millennium Stadium is sure to be the best yet. It’s an amazing venue, always putting on a good show, and in joining forces with Mardi Gras planners Cardiff is in for a treat on August 31st.”

The Cardiff Mardi Gras 2013 promises ten hours of music and entertainment as well as advice and support for the Lesbian, Gay, Bisexual and Transgender communities.

Cabaret Garden with the very best in cabaret, drag and local acts;

Youth Zone specially for 11 – 25 year olds to discuss a range of issues with qualified youth workers;

Family Zone with entertainment for young children and their families;

Community and Market Zone giving visitors the opportunity to shop from local traders and obtain advice from organisations that support the LGBT community;

• A funfair, and range of bars and catering facilities.

The event will also see the return of the Mardi Gras Parade through the city centre when festival-goers fill the streets of Cardiff with colour, floats and carnival for the occasion.

Fans can get their tickets now at the official website: https://www.pridecymru.com/. Tickets are priced at £8 for adults, £5 for children and £20 for a family of four – while under 5s go free.